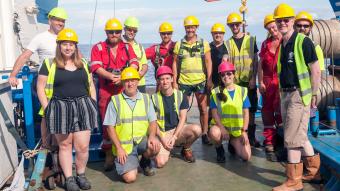 The Oceanography Society (TOS) has named members of the RAPID / MOCHA / WBTS 26ºN team as the inaugural recipients of the TOS Ocean Observing Team Award.

This award recognises innovation and excellence in sustained ocean observing for scientific and practical applications and the citation on the team’s certificate recognises them for transforming our understanding of Atlantic circulation with a breakthrough in observing system design providing continuous, cost-effective measurements.

The Selection Committee noted that this international team, which the NOC is part of, has sustained a core array of moorings across the Atlantic at 26 deg. N for more than 16 years, monitoring changes in the strength of the Atlantic meridional overturning circulation (AMOC).

The activity involves collaborative work between scientists and engineers to calibrate, deploy, and maintain a large suite of in-situ instrumentation and to innovate and trial near real-time telemetry technologies for deep ocean observing.

The awarded group includes a large number of students and postdocs, and collaborations with other disciplines, for example including biogeochemical sensors to couple water transports with estimates of carbon and nutrient fluxes. Their key findings are proving transformative, for example that the AMOC varies on timescales of days to a decade, rather than decades to centuries as previously assumed, and that wind-forcing (rather than buoyancy forcing) plays a dominant role in AMOC variability. The team showed that previous attempts to define secular trends in AMOC from occasional ship-based cruises were biased by aliasing of this highly variable system.

This program and its results have thus transformed approaches to ocean data acquisition toward targeted continuous high-resolution in-situ measurements and have motivated (and advised on) the development of other coordinated mooring-based observatories. The RAPID/MOCHA/WBTS 26ºN team has contributed to open data access and helped to establish community best practices, for example through the Ocean Best Practices System (OBPS) hosted by the Intergovernmental Oceanographic Commission.

NOC, Associate Director for Research, professor Doug Connelly commented, “The NOC is delighted and very proud that our researchers are part of the team to receive the new TOS Ocean Observing Team award. The award truly reflects the world-leading innovation in research and ocean observations that the international team has achieved through collaboration over many years. We are particularly proud of the work by the team to share their skills and best practice, and to nurture future generations of ocean and climate scientists and engineers.”

The current members of the RAPID / MOCHA / WBTS 26ºN team recognised for this award are: