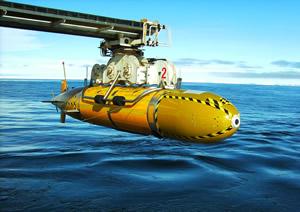 The discovery of the ridge under the Pine Island Glacier ice shelf by Autosub3 could not easily have been made using any other current technology.

Autosub3, a robot submarine operated by the National Oceanography Centre (NOC), has been instrumental in revealing reasons for steady thinning of a vast glacier in Western Antarctica over recent decades.

The new findings, which are important for understanding Antarctica’s potential contribution to sea-level rise under global warming, are reported in the journal Nature Geoscience (20 June).

Autosub3 was deployed deep beneath a floating ice shelf by scientists investigating the thinning and acceleration of Pine Island Glacier. The study was led by Dr Adrian Jenkins of the British Antarctic Survey (BAS), and also involved scientists from NOC in Southampton and the Lamont-Doherty Earth Observatory (LDEO) in the US.

Pine Island Glacier drains around a tenth of the area of West Antarctica, and it is feared that accelerated melting caused by climate warming could exacerbate global sea-level rise. However, because regional climate warming in Antarctica has been discontinuous over recent decades, scientists have puzzled over the apparently continuous and unrelenting thinning of the glacier.

Using Autosub3, the scientists have now identified a probable cause. As the sub probed 60km under the ice shelf, its multibeam sonar system built up a 3D map of the ice above and the seabed below, revealing a 400-metre high ridge rising from the seafloor.

It appears that the glacier once sat on top of the ridge, which would have slowed its flow to the sea. However, a large cavity has now opened up between the ridge and the under surface of the ice shelf. This has allowed access of relatively warm water below the ice, leading to further melting. This probably accounts for the continuous thinning and acceleration of the glacier over recent decades.

Dr Adrian Jenkins of British Antarctic Survey said, “The discovery of the ridge has raised new questions about whether the current loss of ice from Pine Island Glacier is caused by recent climate change or is a continuation of a longer-term process that began when the glacier disconnected from the ridge.”

“We do not know what kick-started the initial retreat from the ridge, but we do know that it started some time prior to 1970. Since detailed observations of Pine Island Glacier only began in the 1990s, we now need to use other techniques such as ice core analysis and computer modelling to look much further into the glacier’s history in order to understand if what we see now is part of a long term trend of ice sheet contraction. This work is vital for evaluating the risk of potential wide-spread collapse of West Antarctic glaciers.”

Autonomous underwater vehicles (AUVs) such as Autosub3are increasingly used for marine research. Autosub3was designed, developed and built at the NOC in Southampton with funding from the Natural Environment Research Council. Seven metres long and weighing 2.4 tonnes (out of the water), the sub is powered by approximately 5000 D-cell batteries. It has a maximum range of 400km, travelling at 6 kilometres an hour for up to 72 hours, with a maximum dive depth of 1600 metres.

The instrument payload is housed in free-flooding areas at each end of the vehicle. In addition to a multibeam sonar system, the AUV carried instruments to measure the salinity, temperature, oxygen concentrations and currents within the ice cavity. It was also equipped with an Acoustic Doppler Current Profiler (ADCP) for navigation.

Steve McPhail of NOC, who specialises in the development of technology and scientific applications of AUVs, said:

“The discovery of the ridge under the Pine Island Glacier ice shelf by Autosub3 could not easily have been made using any other current technology. The success of the mission underscores the importance of the NOC Autosub programme, which aims to develop AUVs with enhanced performance and scientific capability.”