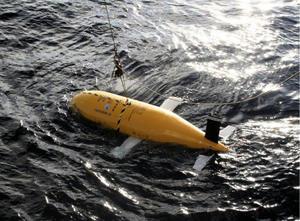 I am very excited about the launch of Autosub Long Range AUV on this FASTNEt mission...

Autosub Long Range, a state-of-the-art autonomous underwater vehicle developed by the National Oceanography Centre, is about to be launched for a 30-day scientific expedition off the coast of Donegal in Ireland.

The programme aims to gain a new understanding of the water exchange between the UK’s shelf edge seas and the deep ocean. The ocean shelf edge is where the shallow coastal waters of the UK’s continental shelf meet the deep ocean water across the steep sloping sides of the shelf edge. It is a nutrient-rich and productive area in terms of sea life and an important area for fisheries. It is also where there is a tremendous movement and exchange of water and nutrients.

Dr Maaten Furlong, Head of Marine Autonomous Robotic Systems (MARS) at the National Oceanography Centre (NOC) said “I am very excited about the launch of Autosub Long Range AUV on this FASTNEt mission. The Autosub Long Range has been developed over a number of years by a dedicated group of engineers at NOC, and it is very rewarding for me and the team to see the vehicle starting to serve the scientific community.

“Autosub Long Range is an ideal vehicle to use with the FASTNEt programme. Its large payload capacity and very long range mean that it can be launched from a harbour in Donegal, undertake a 30-day mission and then return to the shore for recovery. This means the data can be gathered at a relatively low cost. The lower cost of this style of operation has significant potential to change how measurements are undertaken in the ocean, and could enable more routine monitoring of the oceans.”

Professor Mark Inall, lead scientist on FASTNEt at the Scottish Association for Marine Science said “Without Autosub Long Range we would miss the crucial interaction between the strong northward flowing warm waters of the eastern north Atlantic and the uneven seabed terrain at the edge of the continental shelf. Autosub Long Range will provide a new and unique insight into the turbulent boundary between oceanic flows and the shelf edge.”

Dr Furlong said “Cutting edge marine autonomous systems allow the FASTNEt consortium to study the ocean shelf edge in far greater detail than ever before. Autosub Long Range with its microstructure turbulence probe and dual Acoustic Doppler Current Profilers (ADCPs) will be traversing the shelf edge and tracking the continental slope down to 1500 metres while subsea gliders (remotely-operated AUVs) will be mapping the upper water column. These new measurement approaches will complement the more traditional ship-borne measurements and long term moorings, and this combined approach will allow the scientists to study the continental shelf edge in unprecedented detail.”

Autosub Long Range is due to be launched this Wednesday (12 March), weather permitting, from a small harbour in Donegal, towed out into the bay and released on its mission. Advanced satellite technology allows Dr Miles Pebody, the lead software engineer for Autosub Long Range, to pilot the vehicle from the comfort of his research laboratory at NOC, Southampton. He will guide Autosub to the edge of the continental shelf and then repeatedly run terrain-following survey lines down and up the slope that descends into the Rockall Trough.

Dr Pebody said “Autosub Long Range’s mission is to collect detailed data from transects down the continental slope. The vehicle will start at the top of the slope in shallow water and will descend to the base of the slope at 1500 metres and then return. Each transect will take 15 hours and the AUV will repeat this process for up to 30 days. In order to get a clearer picture of seasonal changes on the shelf slope, Autosub will be deployed four times this year, once for each season.”

Dr Furlong added “Autosub Long Range is designed with a target range of 6000 kilometres (over a six months period) and a depth rating of 6000 metres. This range is achieved by going slowly and using the onboard energy very efficiently. Autosub Long Range is designed with a large payload area which allows the vehicle to be customised for bespoke science applications as requirements change. Although still at an early stage, I am sure Autosub Long Range capabilities will have a major impact on how we gather oceanographic data in the future and will help keep the UK at the forefront of oceanographic science.”

For the FASTNEt campaign Autosub Long Range is equipped with: dual 600 kHz Acoustic Doppler Current Profilers (ADCPs) which measure the water velocities above and below the submarine to a range of 50 metres; a microstructure turbulence probe used to measure small scale turbulence in the undisturbed water in front of the AUV; a fluorometer which provides information on the turbidity of the water; and a standard CTD (conductivity, temperature and pressure) sensor used to calculate water salinity and to identify different water masses. This comprehensive sensor suite will provide data about the mixing processes which occur around the shelf edge.

NOC is at the forefront of the development of long range autonomous underwater vehicles and is currently building more to add to its fleet for scientific and commercial use. NOC also builds Autosub 3 and Autosub 6000.

The National Oceanography Centre has Stand 235 at Oceanology International 2014 from 11–13 March at the ExCeL Centre in London, where a scale model of the Autosub Long Range autonomous underwater vehicle will be on display and members of the Marine Autonomous Robotic Systems (MARS) team who developed the Autosub Long Range will be in attendance to answer any questions.

Autosub Long Range was deployed from Rosses Bay, Donegal on 29 March where it transited out to the Malin shelf break. It carried out three successful 24 hour runs down the slope to 1300m and back, but at the start of its fourth run on 4 April, the vehicle stopped communicating and was presumed lost.

However, three months later, it began transmitting its position via its emergency Iridium location beacon. It was 25 km north east of its last known position, which suggests that it had been stationary on the seabed for the majority of the time before releasing its abort weight and floating to the surface.

Autosub LR-1 was recovered shortly after by the RV Celtic Explorer, which was carrying out an oceanographic survey in an area close by. The Marine Institute Ireland was contacted and asked for assistance – and despite the sub not being configured for recovery by the Celtic Explorer, within five hours it was aboard the vessel.

Once at the National Oceanography Centre, a detailed inspection of the AUV and an examination of the recorded data will be undertaken to establish exactly what happened to it during the last three months.

Dr Maaten Furlong, Head of Marine Autonomous Robotic Systems (MARS) at NOC said “We are thrilled to have recovered Autosub LR-1 as it will both provide the data to understand the causes of the initial loss, and will also be available to continue the FASTNEt science campaign. We have two further long range vehicles in the final stages of build at NOC, and so we will be aiming to implement any recommendations from the investigation in these vehicles.”

“I would also like to thank Mick Gillooly of Marine Institute Ireland and the crew and scientists of the RV Celtic Explorer for interrupting their science campaign and assisting us in recovering Autosub LR-1 in such a prompt and efficient manner. The speed and efficiency of the recovery is a credit to the ship’s master and crew.”