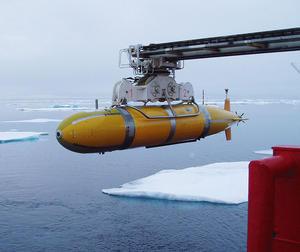 A team of British scientists is making final preparations for an ambitious science mission that will use the National Oceanography Centre-provided Autosub underwater vehicle to monitor recent ice loss from the West Antarctic Ice Sheet.

They aim to discover what’s causing the recent rapid ice loss from the Pine Island Glacier, and whether this loss will continue to increase or slow down. The research is important for understanding the likely impact on future sea-level rise.

Autosub, an unmanned autonomous submarine, was designed and built by engineers at NOC. It has already proved itself on preliminary missions beneath the Pine Island Glacier in 2009. Capable of diving beneath the ice, Autosub will map a ridge on the sea floor that seems to have an important role in the exchange of warm and cold layers of water beneath the glacier. Autosub will make measurements along a pre-defined track then return to the ship with the data.

To understand the rate at which the thickness of the ice changes four autonomous radar instruments, engineered to allow year-round operation, will monitor the gradual change of ice shelf thickness with time. This investigation will help the science team determine how heat is transported beneath the ice shelf by ocean currents and what impact changes in the climate will have on this part of Antarctica.

Dr Andy Smith, British Antarctic Survey (BAS) is the Science Programme Manager for the NERC-funded iSTAR programme. Speaking this week at the British Science Festival in Newcastle he said “We used to think that the volume of water flowing from Antarctica’s melting glaciers and icebergs into the ocean was equal to the amount of water falling as snow onto the ice sheet; and that this process was keeping the whole system in balance. But Pine Island and Thwaites glaciers on the West Antarctic Ice Sheet (WAIS) are losing ice at a faster rate than they are being replenished. This affects sea level all over the world. The speed of changes to this region has taken scientists by surprise and we need to find out what’s going on.”

Starting in November this year the iSTAR science programme will mount four projects focused on finding out what’s causing the rapid changes observed in the Amundsen Sea region of the West Antarctic Ice Sheet. Using state-of-the-art technologies, science teams will measure changes to the flow and thickness of glaciers and investigate the role that the ocean plays in transporting warm water beneath ice shelves.

The first group of scientists depart the UK for Antarctica to spend 10 weeks travelling 600 miles (1000km) across the ice sheet by tractor-traverse. They will use ground-based radar and seismic technologies to map the bed beneath Pine Island Glacier. These will help reveal the influence that glacier bed conditions may have on varying the flow and thickness of ice all the way from the floating shelf up into its inland tributaries. Satellite remote sensing technology will allow the science team to measure the changing configuration of the glacier in areas that are inaccessible from the ground.

In January 2014 a team will sail into the Amundsen Sea onboard the RRS James Clark Ross to spend 30 days putting a range of instruments and devices into the ocean near Pine Island Glacier to discover when, where, and how warm ocean water gets close to the ice.  Ocean measurements and observations are essential for improving a wide variety of computer models used by the international scientific community to forecast future climate and sea level.

A fleet of ocean robots known as Seagliders will measure the temperature, saltiness and current speeds at different depths in the water. Each time the Seaglider reaches the ocean surface it will send back data using satellite phone technology. The scientists will use the information from Seagliders to work out how the warm water is reaching the iceshelf and whether this is likely to continue in future.

To collect data during the Antarctic winter, when the ocean surface is covered by sea ice and inaccessible for research ships, the team is enlisting the help of 15 seals. Tiny sensors, temporarily glued to their fur, will capture information such as the temperature and the saltiness. Satellite technology will send information back to the scientists in their laboratories. This research also provides biologists with a better indication of how vulnerable seals might be to climate change. The sensors fall off when the seals moult their fur.

Professor Karen Heywood, University of East Anglia is Principal Investigator of one of the ocean investigations. She says “We are attempting to tackle this big science question from a number of different ice and ocean perspectives. Our observations and measurements will be a major contribution to the on-going, and urgent, international scientific effort to understand our changing world. We are confident that our results will bring many benefits to science, to policy and to economic decision-making, which will ultimately contribute to the wellbeing of our society.”

The iSTAR programme – investigating the stability of the West Antarctic Ice Sheet – is funded by the Natural Environment Research Council (NERC).