Antarctic lake mission – drilling down on the detail 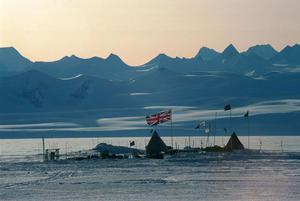 Plans to drill and survey a lake under Antarctica’s ice sheet with a probe designed and built by engineers at the National Oceanography Centre have just reached another milestone.

Lake Ellsworth is one of around 350 subglacial lakes in Antarctica. UK scientists and engineers aim to drill more than two miles through overlying ice to sample its waters for signs of life. They hope to recover sediment from the lake bed to investigate the history of the West Antarctic Ice Sheet. It is one of the biggest UK projects of exploration in recent years, involving teams from ten of the UK’s top universities, research institutes and British manufacturing companies.

Despite temperatures of −30°C, Andy Tait and a team from the British Antarctic Survey have successfully delivered the first of the equipment to the drill site on the West Antarctic Ice Sheet. He and his team crossed 150 miles of snow and ice, negotiating the Ellsworth Mountains and crevasses during the journey. The kit will over-winter on site for a year until the end of 2012 – the austral summertime – when the scientists and engineers arrive to start work accessing the lake.

Now that the first stage of the Lake Ellsworth mission is complete, the focus is on progress with the probe that will explore the lake. Dr Matt Mowlem and his team at the National Oceanography Centre are testing the probe before the final assembly.

The 5.5-metre probe includes a small sediment core unit to take a sample from the lake floor and 24 titanium bottles that will each hold 100ml of water collected at different depths of the lake. Large volumes of lake water will also pass through filter systems that will collect any bacteria or deposits that may be present. 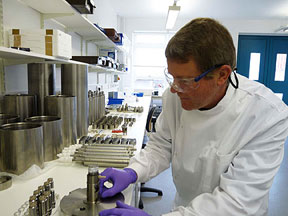 Most of the probe has been specifically designed, developed and built by Matt’s team. Engineers Kevin Saw and Robin Brown are responsible for designing solutions for some of the challenging aspects of the project. One key element is that the water samples will be kept at the same pressure as when they were collected. On return to the UK the bottles will be delivered to the scientists involved in the analysis stage – still under pressure.

The probe will have to cope not only with the pressure at working depths of more than two miles (around 300 bar) but also at the immense pressure that will be exerted on the bottles when the retrieved water starts to freeze and expand on the journey to the surface and across Antarctica (around 2700 bar). Despite being made of Grade 5 titanium, the bottles are expected to bulge under the pressure of the frozen sample. The 24 bottles (and a further 24 back-up bottles) have been precision machined by Dave Jones’ team at NOC’s site in Liverpool. 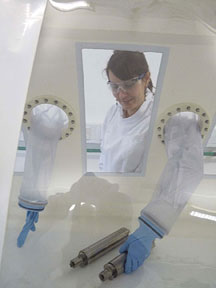 Lake Ellsworth is one of several hundred under-ice lakes in Antarctica. These sub-glacial lakes are made of ice that is kept liquid by the geothermal warmth of the Antarctic bedrock and the pressure of ice above. The lakes have been in existence for around half a million years. Protecting this ancient environment from contamination, and the samples that come from it, is central to the mission.

The mission’s aim is to look for life and leave the lake in pristine condition. It is essential that the probe is sterile. Matt’s team must be confident that the biological material they find originated from the lake and not, for example, from Southampton. Microbiologist Dr Nefeli Tsaloglou is responsible for ensuring that the hygiene levels for the probe are higher than in operating theatres for keyhole surgery.

To achieve this the probe is cleaned and assembled in an isolation tent, similar to those usually used in space research. This sealed chamber fills with hydrogen peroxide vapour destroying any last signs of microbial life. At 5.5 metres long, the probe is too long to fit into a standard microbiological isolation tent. So Robin Brown has constructed a specially extended unit that will accommodate the fully assembled probe.

The next stage for Matt Mowlem’s team is to practice packaging and deploying the probe. It is one thing to do this in a warm lab, quite another task in freezing conditions. In Antarctica the team won’t be working completely outdoors, some of the time they will be in a specially customised container, which will offer some protection from the elements. But low temperatures and heavy gloves will test their dexterity and patience.