Antarctic Krill use hotspots for spawning and nursery of their young 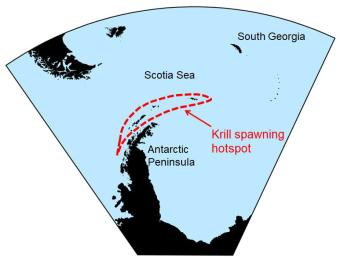 New research published in PLOS ONE has shown how Antarctic Krill, a key species in the Southern Ocean food web, choose different areas of the ocean at the various stages of their life cycle.

This finding is important for conservation of the Krill that form the main diet for animals, such as whales, seals and penguins.

The Antarctic Peninsula is both a prime target for valuable Krill fisheries, as well as a key area for Krill life cycles. Therefore the outcomes of this research emphasises the importance of careful regional management to protect the populations of Krill and the food web that relies on this key species.

This study was led by Plymouth Marine Laboratory (PML), and co-authored by scientists from the NOC, British Antarctic Survey, and the University of Southampton, with support from the Natural Environment Research Council (NERC) and the World Wide Fund for Nature. The team compiled a large database with thousands of net hauls, comprising all available data from surveys of Krill larvae made over the last 41 years. They combined this with two other similar databases for the older Krill, allowing them to compare the distribution maps of all the life cycle stages of Krill for the first time.

The study reveals that although adults are widely distributed, spawning may only be successful over a very small area mainly in the shallower waters near the Antarctic Peninsula. This results in nearby ‘hotspots’ of early larvae, mainly in the Southern Scotia Sea. However, as the larvae grow to become juvenile Krill, their distribution shifts inshore, concentrating over shelves along the northern Antarctic Peninsula.

This partitioning of the Krill habitat may serve a useful purpose, either reducing competition for food within the early developmental stages of Krill, or reducing cannibalism from adults on the small larvae. Whatever the reason, the study highlights the importance of the Antarctic Peninsula for the life cycle of Krill.

Lead author Frances Perry, a PhD student at Plymouth Marine Laboratory, commented: “Whilst fishing areas obviously overlap with areas of high adult density, this study shows for the first time that fishing also overlaps with spawning sites. It is important to protect these sites from the potential impacts of fishing. We need to understand the dynamics of this complex ecosystem so that it continues to support the diverse and commercially important Southern Ocean food web.”