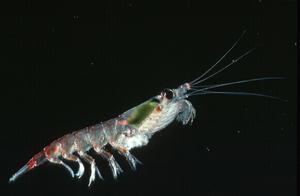 A new discovery reveals that the shrimp-like creature at the heart of the Antarctic food chain could play a key role in fertilising the surface waters of Southern Ocean with the essential element iron – stimulating the growth of phytoplankton (microscopic plant-like organisms). This process enhances the ocean’s capacity for natural storage of carbon dioxide.

Reporting this month in the journal Limnology and Oceanography, an international team of researchers describe how Antarctic krill (Euphausia superba), once thought to live mostly in surface waters, regularly feed on fragments of decaying organisms on the sea floor, and inadvertently ingest iron-rich sediment particles. They swim back to the surface with stomachs full of iron, releasing it into the surface waters.

Antarctic krill is the staple diet for fish, penguins, seals and whales; and is harvested by commercial fisheries for human consumption.

Lead author from British Antarctic Survey, Dr Katrin Schmidt says, “We are really excited to make this discovery because the textbooks state krill live mainly in surface waters. We knew they make occasional visits to the sea floor but these were always thought as exceptional. What surprises us is how common these visits are – up to 20% of the population can be migrating up and down the water column at any one time.”

Co-author from the National Oceanography Centre, Southampton, Professor Eric Achterberg says, “Phytoplankton communities in large parts of the Southern Ocean are limited by iron, resulting in low productivity and consequently low export of carbon in the form of sinking dead phytoplankton matter. As the Southern Ocean plays a key role in the global carbon cycle, knowledge about supply of iron and its effects on productivity is important.”

The scientists painstakingly examined the stomach contents of over 1,000 krill collected from 10 Antarctic research expeditions. They found that the krill, caught near the surface, had stomachs full of iron-rich material from the seabed. The team also studied photographs of krill on the seafloor, acoustic data and net samples. All these provided strong evidence that these animals frequently feed on the sea floor.

This finding has implications for managing commercial krill fisheries and will lead to a better understanding of the natural carbon cycle in the Southern Ocean.

Schmidt continues, “The next steps are to look at exactly how this iron is released into the water.”

Tags:
School of Ocean and Earth Science (SOES)
life in the oceans