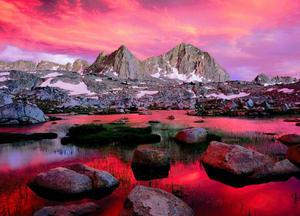 The PETM has been compared to modern global warming caused by anthropogenic greenhouse gas emissions.

A research team including scientists from the University of Southampton’s School of Ocean and Earth Science (SOES) based at the National Oceanography Centre, Southampton, has uncovered the likely cause of repeated episodes of natural global warming during the ancient past.

Several episodes of pronounced and rapid global warming are known to have been superimposed upon the already very warm ‘greenhouse’ climates of the Palaeocene and Eocene epochs (65–34 million years ago). The most extreme of these ‘hyperthermals’ was the Palaeocene–Eocene Thermal Maximum (PETM) around 56 million years (Myr) ago. This episode of warming lasted for about 170,000 years, with global average temperature increasing by 5–7°C.

“Scientists believe that the PETM resulted from a massive increase in atmospheric greenhouse gases from large-scale release of carbon stored in sedimentary rocks,” said lead author Dr Philip Sexton, formerly of SOES, now at the Open University, UK. “Because of its rapid onset, and the release of vast amounts of carbon dioxide into the atmosphere from sedimentary sources, the PETM has been compared to modern global warming caused by fossil fuel burning.”

Scientists have previously documented six other, more modest, warming events during the Palaeocene and Eocene, which have also been linked to the release of carbon stored in sedimentary rocks.

Past climate can be reconstructed from the chemical composition of tiny marine plankton called foraminifers, the fossilised shells of which are preserved in deep-sea sediments.

Sexton and his colleagues reconstructed Eocene climate using sediment cores drilled from the Demerara Rise in the tropical western Atlantic Ocean. Their new records cover a period of 2.4 million years (47.6–50.0 Myr ago), corresponding to the transition between the early Eocene and middle Eocene.

They found evidence for 13 of the more modest hyperthermals, indicating that such abrupt climatic warmings occurred much more often than has been appreciated hitherto. However, with average durations of around 40,000 years, these warming episodes were much shorter-lived than the PETM, with their recoveries being particularly rapid.

“These more modest hyperthermals were spaced 100 or 400 thousand years apart during the period covered by our new records, suggesting that their timing reflects changes in the eccentricity of Earth’s orbit” said Professor Paul Wilson of SOES. “They developed very rapidly, over a period of around 5–10 thousand years, but recovery look longer, up to 30,000 years, which is still comparatively rapid.”

“We believe that the mechanisms driving these more modest, relatively short-lived hyperthermals were different from those responsible for the PETM,” said Dr Sexton.

The PETM is believed to have involved the exhumation of carbon from a sedimentary reservoir(s), possibly triggered by plate tectonics and volcanism, or even a comet impact. This would have been followed by the subsequent burial of carbon back into sedimentary rocks over a long period of time, likely controlled by rock weathering reactions.

However, the comparatively rapid recovery of the more modest, short-lived hyperthermals implicates redistribution of carbon among the readily exchangeable, active reservoirs at Earth’s surface(the ocean, land biosphere and atmosphere).

“We believe that large amounts of carbon dioxide were repeatedly released into the atmosphere owing to increased ventilation of the ocean’s interior and strengthened oxidation of a larger-than-modern reservoir of dissolved organic carbon,” said Professor Wilson. “When conditions permitted, this carbon dioxide would have been relatively rapidly taken up again by the ocean, giving rise to the rapid recoveries of these global warming events.”

The implication is that recurrent, large-scale exchanges of carbon between the ocean interior and the atmosphere played a central role in driving global climate instability during the Eocene, rather than the previously assumed unparalleled, regular releases of carbon from sedimentary rocks. In addition to highlighting the potential inherent instability of warm ‘greenhouse’ climates, these findings emphasise the unprecedented nature of our current relentless discharge of carbon from sedimentary fossil fuel deposits into the atmosphere.

This research used samples and data provided by the International Ocean Drilling Program (IODP). The research was sponsored by the US National Science Foundation and supported by the European Commission, the Leverhulme Trust, the UK’s Natural Environment Research Council (NERC), and the DFG-Leibniz Center for Surface Process and Climate Studies at the University of Potsdam. Lead author, Philip Sexton is now at the Department of Earth & Environmental Sciences Open University.