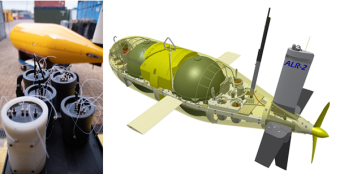 TechOceanS is an ambitious project that has the potential to revolutionise how we measure and monitor our changing oceans.

International ocean technology experts from the UK, Cyprus, France, Germany, Greece, Ireland, Italy, and Spain are uniting to develop a range of new in-situ sensing, imaging and sampling technologies that will improve our understanding of the chemistry and biology of the ocean under a new project being co-ordinated by the National Oceanography Centre.

Funded by a €8.9M grant from the European Union’s Horizon 2020 programme, TechOceanS – Technologies for Ocean Sensing – will pioneer five new sensors, two imaging systems, a novel sampler and an Artificial Intelligence-driven image processing methodology, all capable of robust operations at depths beyond 2,000 metres.

TechOceanS will actively engage with scientists, manufacturers, marine stakeholders and resource managers to target “Essential Ocean Variables” that currently can only be measured by observations from a ship. The new technologies developed in the project will enable the capture of vital, previously inaccessible data on the ocean’s biogeochemistry, biology and ecosystems.

The project’s highly interdisciplinary team ensures that the technologies developed will both expand our knowledge of the ocean’s interconnected systems and provide tangible benefits to those industries most directly reliant on them, such as fisheries and aquaculture. The data generated will also support conservation initiatives and provide vital information for policymakers.

The NOC’s Professor Matthew Mowlem, TechOceanS Project Coordinator, said: “TechOceanS is an ambitious project that has the potential to revolutionise how we measure and monitor our changing oceans. The exciting technology we’re developing will capture important data that will have a significant impact in diverse areas such as ocean conservation, resource management, blue economy and policy.” TechOceanS will deliver an unprecedented acceleration in the diversity and capability of sensors and measurement systems. Technical ambitions for the project include:

The future impact of these valuable technologies relies on their accessibility. Therefore, TechOceanS technology pilots will be low-cost and place minimal demands on existing infrastructure, allowing them to be made available for use by all countries regardless of resources.

In addition to expanding scientific knowledge of the ocean, TechOceanS will focus on improving “ocean best practices” by working closely with the IOC-UNESCO to develop training and standards covering metrology and operation of measurement systems in addition to the application of management principles, standards, protocols and communications for open access data. In this way, the project will ensure the developed best practices are truly global, inclusive and transparent.

Through the targeted technologies, diverse partner base and cooperation with concurrent projects, TechOceanS will contribute to the growth of scientific knowledge, the transfer of marine technology and other key components of the Blue Economy as described in international accords such as the UN’s Sustainable Development Goals, the G7 Future of the Seas and Oceans Working Group, the Paris Climate Agreement, the UN Decade of Ocean Science for Sustainable Development, and the EU Marine Strategy Framework Directive.

Dr Patricia López-García, one of the TechOceanS project managers, said: “In addition to the work carried out within the project, TechOceanS will form mutually beneficial links with a number of other projects over its lifetime, such as Nautilos, EuroSEA, Blue-Cloud, iAtlantic, AtlantECO, Euro-Argo ERIC, MISSION Atlantic and others. Through these synergies, we are excited to contribute to a brighter future for our world’s seas.”

The TechOceanS launch meeting was held on Tuesday 10 November 2020. The first priorities for the project will include targeting key enabling innovations and establishing cross-cutting research activities to accelerate the development of targeted technologies and forming plans with target dates for their testing demonstration and roll out.