Abyssal region of the Pacific reveals species new to science 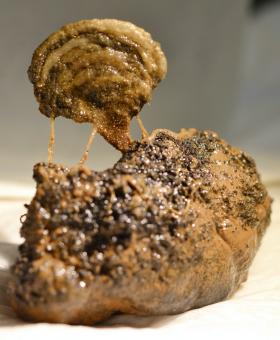 Scientists at the NOC have discovered 34 new species of giant single-celled organisms living at depths of more than 4 km in the eastern equatorial Pacific. The study areas are among those licensed by the International Seabed Authority (ISA) for exploration by companies with an interest in possible future deep-sea mining.

Commenting on the study, which is published in Biological Conservation, NOC scientist and lead author Professor Andrew Gooday explains “These findings represent an unprecedented increase in the known global diversity of these very unusual protozoans. In comparison, an intensively studied site located at a similar depth in the Atlantic has so far yielded only seven species of xenophyphores. Moreover, analyses of the Pacific material by our coauthors at the University of Geneva has increased the global genetic database for xenophyophores by more than an order of magnitude. This part of the Pacific seems to be a hotspot for xenophyophore diversity.”

Xenophypores are fragile and probably largely immobile unicellular organisms, members of a larger group called the foraminifera, that create structures called ‘tests’ from sediment particles. They form a major constituent of faunal assemblages in the abyssal Pacific and play a crucial role in deep-sea ecosystems by providing shelter and substrate for other organisms. Their often intricate tests also enhance the organic content of surrounding sediments, delivering a nutritional food source for deep-sea deposit feeders such as brittle stars.

The delicate tests of xenophyophores are frequently attached to polymetallic nodules, the targeted mineral resource in the Pacific, making them particularly vulnerable to impacts from seafloor mining.

“Given their importance in abyssal Pacific ecosystems, the loss of xenophyophores as a result of the removal of nodules from this region could have wider implications for the recovery of benthic communities following human disturbances” added Professor Gooday.

This research forms part of a wider environmental baseline study, involving a consortium of researchers from American and European institutes, in the UK-1 exploration license area - a region encompassing ~50,000 km2 of seafloor within the Clarion Clipperton Zone licensed by the ISA to UK Seabed Resources Development Ltd, the British company funding the project.

Professor Edward Hill, Executive Director at the NOC, commented, “The NOC is undertaking research related to many aspects and perspectives involved in the exploration of deep-sea resources. Our research is aimed at informing with sound scientific evidence the decisions that will need to be taken in the future, as people increasingly turn to the deep-sea to address some of society’s greatest challenges.”