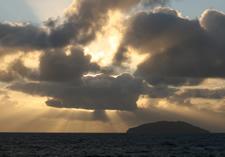 The United Nations has declared 8 June as World Oceans Day after the concept was proposed at the Earth Summit in Rio de Janeiro in 1992. The goal of World Oceans Day is to raise awareness of how vital the ocean is and its importance in daily life.

Test your knowledge of the oceans by answering this quick quiz:

How much of our planet is covered by seas and oceans? Which is the largest ocean?

Less than half / The Indian Ocean


The largest ocean is the Pacific. Oceans cover 71% of the Earth’s surface, so nearly three quarters of our planet; it represents about 140 million square miles (362 million sq km).

Others key facts:
More than 97% of our entire planet’s water is contained in the ocean.
More than 90% of the planet’s living biomass is found in the oceans.
The top ten feet of the ocean hold the same amount of thermal energy as exists in the entire atmosphere.
Maybe, we should call our planet “Planet Ocean” rather than “Planet Earth”...

What is the average seawater temperature?

Observations taken since 1961 show that the average temperature of the top 3000 metres of the world ocean has been increasing. The oceans are an important part of the Earth's climate system. The Ocean Circulation and Climate group, comprising researchers from the National Oceanography Centre and the University of Southampton’s School of Ocean and Earth Science, is looking at the role of the ocean in changing climate.

How many dissolved chemical elements can be found in the ocean?


The answer is 78. Everyone knows the oceans are salty, but... did you know that the ocean contains every naturally occurring element known, together with numerous compounds and minerals? The main chemical constituent of seawater is common salt – sodium chloride (NaCl), a very simple chemical compound. However, ocean water also contains all the gases found in the atmosphere but in different proportions, oxygen, nitrogen and carbon dioxide being relatively abundant.

It was thought that the salt in the oceans had accumulated over the approximately 3 billion years that rivers had flowed into it, carrying dissolved salts from soil erosion, but the oceans contain some elements that are not found in river water, chlorine, bromine and sulphur for example, in abundance. The source of these elements remained a mystery until more was learned about the structure of the ocean floors.

Underneath the sediments on the ocean floor are magmas, generated by mid-ocean ridges. The gases given off by these volcanoes are rich in compounds containing chlorine, bromine and sulphur. As the molten magmas meet the cold ocean water they solidify and break up allowing the water to get into the cracks, scouring out soluble minerals. The superheated solution re-emerges through hydrothermal vents carrying elements such as chlorine, bromine and sulphur. Scientists think that water itself also came out of these rocks and it was salty right from the start. The levels of salts are kept constant by complicated geochemical cycles.

The processes which control the transfer of material between the Earth’s ocean, mantle, solid crust, sedimentary blankets, atmosphere, and biota are studied at NOC by the Geochemistry group which is a collaborative research group comprising researchers of the NOC and the University of Southampton School of Ocean and Earth Science. They apply state of the art geochemical analysis and modelling to scientific questions of major societal, economic and environmental importance. One of the main questions is how can we quantify, forecast, and mitigate the effects of climate change, pollution, global consumption, and geo-hazards on human health, the environment, and the sustainable use of natural resources.

True or false: Seawater can be orange

True! Actually, seawater can be many different colours – blue, green, grey, even brown or orange.

The colour of the sea can tell us much about what is in the water.

Ocean colour is measured daily from satellites. This helps to find fish and other animals, trace ocean currents and monitor marine pollution. Ocean colour gives early warning of blooms that can harm animals and humans. Ocean colour can also be used to study climate change.

For example, you can know how much phytoplankton there is in the water with the ocean colour. Phytoplankton is the ‘grass’ of the sea: wherever it grows, there is food for marine animals.

Recently, scientists from NOC found that variations in phytoplankton community structure have impacts for carbon-export and deep-sea ecosystems. Knowledge of how phytoplankton community structure varies in space and time is fundamental to our understanding of the ocean’s uptake of carbon dioxide, without which global warming would further accelerate.

The longest mountain range on Earth is the:

The length of the Mid-Atlantic Ridge is around 11,300 kilometres.

In comparison, the Andes, the world’s longest mountain range on the surface of a continent, is 7,000 kilometres (4,300 miles) in length. The Himalaya Range contains the highest mountains on the Earth's surface, the highest of which is Mount Everest.

How many humans have visited the deepest part of the ocean? (in a submersible – it’s too deep for divers):


The Mariana Trench is the deepest part of the world’s oceans, and the lowest elevation of the surface of the Earth’s crust. It is located in the western Pacific Ocean, to the east of the Mariana Islands.

The Swiss-designed, Italian-built, United States’ Navy bathyscaphe Trieste reached the bottom on January 23, 1960, with U.S. Navy Lieutenant Don Walsh and Jacques Piccard, a Swiss oceanographer and engineer, on board. Iron shot was used for ballast, with petrol for buoyancy. The onboard systems indicated a depth of 11,521 m (37,799 ft), but this was later revised to 10,916 m (35,814 ft).

At the bottom, Walsh and Piccard were surprised to discover sole or flounder about 30 cm (1 ft) long, as well as shrimp. According to Piccard, "The bottom appeared light and clear, a waste of firm diatomaceous ooze".

Only three descents have ever been achieved. The first was the manned descent by Trieste in 1960. This was followed by the unmanned Remotely Operated Vehicles Kaikō in 1995 and Nereus in 2009. These three expeditions directly measured very similar depths of 10,902 to 10,916 m.

The most important advances in oceanography have come from new technologies that enable us to make measurements in new ways or get to previously inaccessible places. The National Oceanography Centre develops advanced ocean observing technologies (including platforms, sensors and communications systems) in support of marine science, and also underwater vehicles like Autosub, one of the world’s leading research robot subs, to investigate this world.

True or false: There is no life in the deep ocean

False! But life is not uniformly distributed throughout the depth and breadth of the oceans. Vertical distribution of marine organisms is largely controlled by the depth of light penetration. Sufficient light for photosynthesis penetrates only a short distance below the surface to a depth of around 200m, depending on the turbidity of the water.

In the deep sea, it becomes a world of darkness ruled by prehistoric-looking fish with knife-sharp teeth and cavernous mouths patrolling the waters... To survive in the dark zone, creatures have had to develop senses other than sight as well as a few astonishing tricks. More than two thirds of the species living in this region produce bioluminescence – the emission of visible light.

Until the late 1970s little was known about the possibility of life on the deep ocean floor but the discovery of thriving colonies of shrimp and other organisms around hydrothermal vents changed that. Before the discovery of the undersea vents, all life was thought to be driven by the sun. But these organisms get their nutrients from the Earth's mineral deposits directly and they thrive in completely dark and anaerobic environments.

Marine biodiversity remains poorly understood and underestimated. Only 1,746,000 marine species have been listed in the census, in spite of the fact that 10 to 100 million species inhabit the ocean depths, according to the scientific community.

True or false: Penguins can be found living on the equator (living in the wild, not in a zoo)

True – the Galapagos penguin! This is the smallest of the warm weather penguins. It stands only 16 to 18 inches (40 to 45 cm) tall and weighs only 5 pounds (2 to 2.5 kg). Galapagos penguins have a thin white band that runs under their chin. They have a black upside down horseshoe shape around their belly. They are found on the Galapagos Islands and on Isabela Island just north of the Equator. No other penguins live this far north. Keeping cool is the penguin’s biggest challenge - temperatures this close to the equator reach over38°C during the daytime. The Galapagos Penguins keep cool by swimming and hunting for food in the cold water of the Cromwell Current during the day. During the cool nights they sleep and nest on the land. They hold their flippers out to help the heat escape their bodies and protect their feet from getting sunburned by holding their flippers over their feet when on land.

What is El Niño?

An important current in the Caribbean

A climate pattern that occurs across the tropical Pacific Ocean regularly

The name of a big party in South America


El Niño occurs in the South Pacific Ocean between Australia, Indonesia and South America. It is a disturbance of the normal balance between oceanic and atmospheric components of the climate.

Under normal conditions, reliable winds blow from South America, westwards across the Pacific Ocean, towards southern Asia and Australia. This causes the water to heap up on the western side, so that the sea level is half a metre higher! As the warmer water is water is shifted, cooler water rises to replace it. This water is rich in nutrients from the bottom of the ocean.

The name El Niño means the Little Boy or Christ Child in Spanish. It was used because the event often occurred around Christmas time. Fishermen recognised it from the appearance of warmer than usual water which they could link with the prediction of reduced catches later in the year.

On a wider scale, the influence of such a large shift in one component of the climatic system can be felt beyond the immediate vicinity of the South Pacific.

The first voyage designed solely to collect oceanographic data was aboard the:


Serious investigation of the deep-sea environment didn’t take place until the 19th Century when the historic HMS Challenger expedition (1872–1876) set out to discover what lay beneath the surface of the world’s oceans.

After the first submarine telegraph cable was successfully laid across the English Channel in 1851, governments and cable companies quickly realised that much more knowledge about the seafloor was needed. But interest in the oceans wasn’t just restricted to cable companies. Since Charles Darwin published his ‘Origin of the Species’ in 1859, fossil collecting on beaches had become a hugely popular pastime among the Victorian public.

The first marine science research cruise departed from Portsmouth on 7th December 1872, bound for a three and a half year-long journey all around the world’s oceans. Aboard HMS Challenger were a team of six scientists led by British biologist Charles Wyville Thomson, 20 Navy officers and a crew of more than 200 men. The Challenger expedition marked the start of a new era in marine exploration.

HMS Challenger was loaned to the scientific mission by the British Navy. In order to be suitable for carrying out scientific investigations, the ship had to undergo extensive alterations, including removal of all but two of the cannons to make room for equipment and sample storage. 144 miles of hemp rope (used for sounding) and 12.5 miles of piano wire (used for pulling up samples from the seabed) were loaded onto the ship.

In addition, two laboratories were constructed on board – one for chemistry and one for biology.