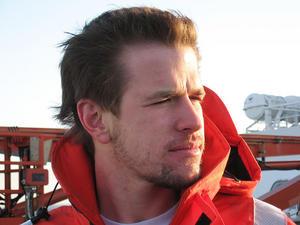 Our first task at the East Scotia Ridge is to re-occupy the hydrothermal sites studied last year. A cluster of chimneys which vent at temperatures over 380°C produce a buoyant plume of warm water and particles which are dispersed laterally a few hundred metres above the seafloor. We lower our instruments into the ‘smoke’ to detect the plume distribution and pump large volumes of water onto huge filters so we can analyse the particles once we return to Southampton. 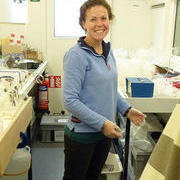 Jeff Hawkes and Cathy Cole are both PhD students in the Graduate School at NOCS. Jeff is studying organic carbon in these hydrothermal systems, so he collects samples to measure gases such as methane and water samples so he can measure the dissolved organic carbon in the hydrothermal plume. One of the things he wants to understand is how these organic molecules interact with the dissolved metals that vent from the seafloor.

Jeff spends long hours filtering water in a container on the aft deck of the ship. He is helped out by Cathy Cole who has just started her PhD work. She is collecting particles from the plume and surrounding water so she can measure the trace metals adsorbed onto the particle surfaces. The rare earth elements, present in minute amounts, tell us about the processes that occur as the vent fluids mix with sea water and are dispersed into the deep ocean.