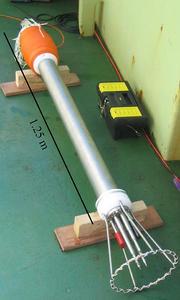 Turbulence measurements: On RSS Discovery cruise D361 turbulence in the upper ocean is being measured at every station using an ISW free-fall vertical microstructure profiler.

Turbulence is an energetic, eddying, diffusive, and highly dissipative state of motion of water which results in the transfer of heat, salinity, and nutrients (including iron, nitrogen and phosphorus) at much greater rates than molecular processes alone. The rate at which heat, salinity, and nutrients diffuse as a result of turbulent motion is often described as turbulent diffusivity.

The main source of nutrients to the surface ocean is deep winter convection. Nevertheless, in the nutrient limited (oligotrophic) waters of the sub-tropical gyres, through which cruise D361 is passing,the small but constant supply of limiting nutrient from turbulent mixing may control levels of primary production. For example, in the oligotrophic eastern Atlantic the vertical turbulent nitrate flux has been observed to match within error limits the integrated rate of nitrate uptake measured, in situ, by 15N-labelled nitrate incorporation. 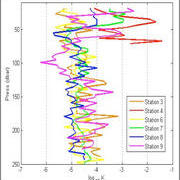 The ISW microstructure profiler (pictured above) is produced by Sea and Sun Technology GmbH in co-operation with ISW Wassermesstechnik. It is designed for rapid vertical profiling within the upper 300 m of the water column of the ocean and is lightly tethered (connected) to the ship during deployment. Data from the profiler are transferred via the tether (cable) to a laptop PC.

During deployment, the ship moves with speed approx. 0.5-1.0 knots with respect to the water against the wind. Disturbing effects caused by cable tension (vibrations) and the ship’s movement are minimized by maintaining slack in the tether. Typically 10 profiles are taken per station, and the operation takes ca. 2 h.

To date (March 2nd 2011), the profiler has been deployed at six stations in a transect along 120 N out from the coast of Senegal. Preliminary estimates of turbulent diffusivity from these measurements are within expected values for the open ocean. However the results may show evidence of a trend with turbulent diffusivity decreasing as distance from the coast increases (from stations three to nine below).