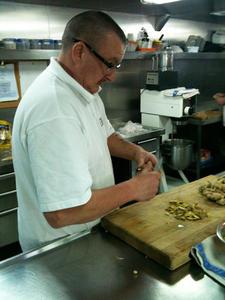 We have spent the weekend surveying our second volcanic target in Bransfield Strait: the Middle of the Three Sisters. Again we use the plume sniffing approach followed by video surveys of the seafloor before choosing our coring sites. 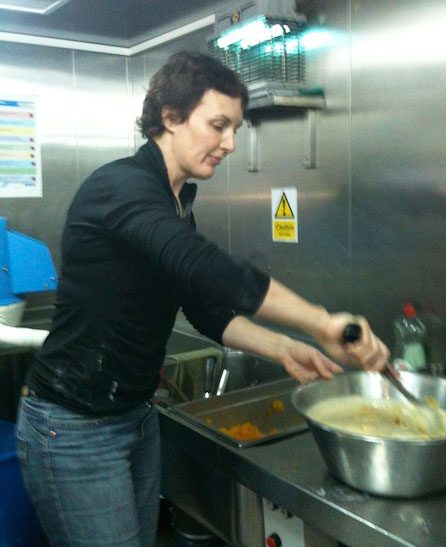 The fog has come down on the Strait and we have seen little but fine cloud for days, lying low on calm seas.

In the meantime the shipboard routine ticks on. Darren Caines is head chef and invites me to help out in the galley over the weekend; he has a surfeit of pumpkins in the stores so I make pumpkin pie for 45 which is messy, entertaining but largely successful! But I think I should stick to the day job.

Darren has worked for NERC for nearly 8 years, this job is his favourite so far in a career that has taken him all over the world. Preparing three meals a day for a shipload of hungry and demanding diners with the limited supplies we could get in blockaded Punta Arenas is challenging but they are doing a great job.

For excerpts from the dive log and pictures from the seafloor see www.thesearethevoyages.net/jc55/jan24.html.