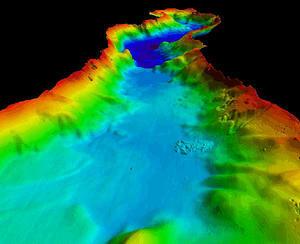 PhD student Helen Miller has been in the news in the Northeast with her research on Windermere. Working with the British Geological Survey, the Environment Agency and the University of Southampton, her PhD studies aim to investigate modern and glacial environments and processes in Windermere.

A BGS survey has generated images of the lake bed as if there was no water and this data has been used to produce a landscape map of the lake. The map will allow scientists to understand how the lake evolved after the last Ice Age and link up geography with biology.

Helen was interviewed by BBC Radio Cumbria and BBC North West Tonight about her research on Windermere. She is based at the National Oceanography Centre in Southampton.

Windermere is divided into two distinct basins, a larger North Basin and a slightly smaller South Basin separated by a line of low islands and shallows. The deepest point in the North Basin is 62 m, compared to 44 m in the South Basin. The lake bed is characterised by a number of sub-basins separated by steps and ridges. Isolated areas of higher ground, plateau features and exposed bedrock further characterise this basin topography. These features were formed during the most recent Devensian glaciation. Superimposed on this underlying structure are debris flows and features formed by human activity relating to the Holocene period.