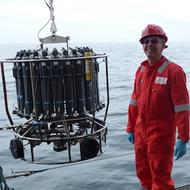 Sunday starts with a steam to a new position nearer to the Antarctic Peninsula where we have chosen a site to core the seafloor. Overnight we homed in on the chemical anomalies in the water column that tell us where the vent and seep sites are on the seafloor. 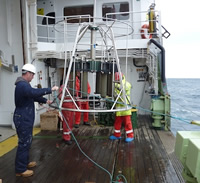 The mud in the Bransfield Strait is rich in organic carbon that comes from the productive ecosystems in this area. With the heat from the tectonic rifting of the area, this leads to some interesting reactions at the seafloor that we want to study further. We want to collect mud from the seafloor with the overlying water and any burrowing organisms captured intact, so we use the megacorer. 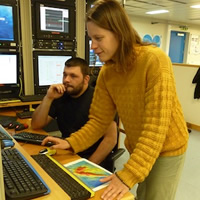 Veerle Huvenne is responsible for anything that has to do with maps during the cruise; she takes the output from the various acoustic systems mounted on the ships hull and turns them into maps of the seafloor showing craters and sediment ponds so we know where to sample. Veerle has worked for over 7 years at the NOC specializing in habitat mapping of cold water corals and deep sea canyons. This is her second vent and seep expedition.

Friday night and it is 2 days since the ROV was severely damaged and we are well into our revised science plan. We spent the day mapping out the seafloor in detail and identifying areas of sediment cover within the Strait. The weather has been perfect for survey work, the icebergs floating past even carry penguins from the nearby King George Island

Doug Connelly, our expert plume tracker is leading the team in tracking down the sources of the plumes in the water column above Hook Ridge. Doug has worked at the NOC since 1999, joining us from the Bermuda Institute of Ocean Sciences. “This is what I love to do” says Doug, “and we know this approach works to find new vent and seep environments on the seafloor.” Doug and his team have previously had successes in the Arctic, the Scotia Sea and the deepest known vents in the Cayman Trough.

We spent Friday night towing the CTD* package up and down to near the seafloor to sniff out the chemical anomalies produced by any vents or seeps. The CTD is equipped with extremely sensitive sensors, and particularly useful is an instrument leant to us by our colleague Ko-ichi Nakamura from the National Institute of Advanced Industrial Science and Technology in Tsukuba, Japan. As the night progresses we map out the plume distribution and pin point possible sources.