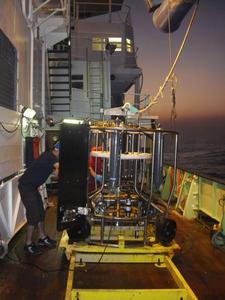 Hi, I’m Sarah Reynolds and I’m a post doctoral research associate working with Dr Claire Mahaffey and Prof Ric Williams at the University of Liverpool. Our work is focused on determining the magnitude and cycling of phosphorus in the (sub) tropical Atlantic.

As mentioned in previous blogs much of the focus of this cruise has been on the differences observed in nitrogen fixation between the northern and southern (sub) tropical Atlantic. The prevalence of nitrogen fixation in the northern Atlantic has been attributed to the natural fertilization of the North Atlantic with aeolian inputs from the iron-rich dust from the Sahara desert, which supports and periodically enhances growth and activity of iron-demanding nitrogen fixers or diazotrophs. However, diazotrophs are phosphate-demanding and previous research has demonstrated that the north Atlantic sub tropical gyre is depleted in phosphorus in comparison with the southern gyre (see Mather et al., 2008). To date, there is no evidence for an equivocal input of phosphorus from aeolian dust inputs. Thus, the source of phosphorus to the North Atlantic and how the N2 fixing community meets its phosphorus demands remains a conundrum.

Despite inorganic phosphate concentrations being depleted in the subtropical ocean, there is a large complex pool of dissolved organic-bound phosphorus (DOP) that can be up to two orders of magnitude more abundant than phosphate. Little is known about the source, composition and recycling of DOP. DOP may be produced and recycled within the gyre, or exuded during high biological activity at the flanks of the gyre (e.g., in upwelling or shelf regions) and advected into the gyre through horizontal transport. The DOP pool consists of a series of complex organic molecules of varying lability, with the ester group being one of the more bioavailable. Indeed, DOP can act as an alternative source of phosphorus to both autotrophic and heterotrophic organisms, which have the ability to access DOP via extracellular hydrolytic enzymes, such as alkaline phosphatase and nucleotidase that cleave phosphate from phospho-ester (organic) molecules. However, the concentration of phospho-esters in the (sub) tropical ocean are unknown.

The ubiquitous marine nitrogen fixer, Trichodesmium spp., and potentially other members of the N2 fixing community, are known to produce alkaline phosphatase in response to phosphorus stress, the activity of the enzyme being indicative of relative phosphorus limitation. Some organisms (including Trichodesmium) may also use enzymes to access the phosphorus contained in phosphonate bonds (Dyhrman et al. 2006).

The aim of our work on D361 has been to (a) determine the relative importance of phosphate and DOP by the whole water microbial community and Trichodesmium, (b) determine the variation in DOP production relative to its consumption and (c) identify source regions of DOP. To achieve these aims, Claire and I (with the help of Anouska Panton) have measured the uptake of inorganic phosphate and rate of alkaline phosphatase activity of the whole water community as well as Trichodesmium spp. specific rates. DOP production from the bulk community has also been determined onboard. We have also been busy collecting samples to determine the concentration of DOP, enzyme hydrolysable phosphorus, particulate organic phosphorus and the presence and expression of phosphorus-related genes.

We are now nearing the end of this cruise and while we’re all eager to get our feet back onto dry land there have been many laughs along the way and plenty of sunshine to enjoy!