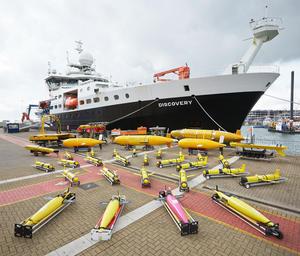 The Natural Environment Research Council announced today that it will invest £15m in Marine Autonomous Systems (MAS) and sensors over a five-year development programme.

A £10m investment will be made through the National Oceanography Centre (NOC) to ensure the UK remains at the forefront of global marine science and technology innovation by developing a new 1500m depth-rated Autosub Long Range (ALR1500) and a new 6000m depth-rated autonomous underwater vehicle (Autosub6000 Mk2). This will support future under-ice and deep-ocean science, including a number of upcoming major marine research programmes such as the Changing Arctic Ocean programme.

There will also be investment in command-and-control systems for efficient fleet management, and new equipment to support the NERC–EPSRC Centre for Doctoral Training in ‘Smart and Autonomous Observing Systems’, called NEXUSS – ‘NEXt generation Unmanned System Science’.

NERC will also invest up to £5m in an open call for novel sensor development suitable for deployment on various submarine and surface platforms including the new MAS platforms described above.

This new investment will provide unprecedented capability in ocean observing for all of the UK marine science community with persistent presence of hostile and previously inaccessible deployment of significant new capacity to tackle some fundamental “global environmental science” questions. Further information will be announced later this year.

“This investment will help develop ambitious new technologies for researching the oceans and maintain the UK’s world-class status in autonomous marine platforms.” said NERC’s chief executive Professor Duncan Wingham. “It will also support specialised skills and training in this exciting area, producing the skilled scientists, engineers and technologists who will carry out innovative marine science in the decades to come.”

Professor Ed Hill OBE, the Executive Director of the National Oceanography Centre (NOC), said: “We see this investment as a further endorsement by NERC of the strength, excellence, and ambition of UK marine science, and this will see the UK leading new capabilities in developing new ocean observing technologies. This will give unprecedented opportunity to observe complex biogeochemical and biological processes and do so in very difficult and hostile environments including extended endurance beneath the Arctic Ocean sea-ice and Antarctic ice shelves which are increasingly seen as critical environments in understanding global climate change. NOC will be working with the wider marine science community to prioritise the investment in new autonomous platforms and marine sensor development over the five-year period.”