I can travel on my own for miles under water and ice, at great depths, undertaking scientific research and sending my findings back to scientists on ships and on land.

My friends and I are part of the National Marine Equipment Pool, Europe’s largest fleet of ocean-going scientific instruments.

In March 2016 the Natural Environment Research Council launched a campaign to find a name for the UK’s next world-class polar research ship. One suggestion in particular captured the nation’s imagination and #BoatyMcBoatface was soon trending on Twitter and being talked about all over the world! The ship was named another popular choice, RRS Sir David Attenborough, but the popularity of ‘Boaty’ could not be ignored, and so one of the National Oceanography Centre’s Autosub Long Range autonomous vehicles now proudly carries the name.

Boaty’s adventures will help tell the story of ocean exploration to a whole new audience, and a full sized inflatable and the cartoon likeness will travel to events across the country.

Boaty, and two other Autosub Long Range vehicles have been developed at the NOC and are able to travel thousands of kilometres on missions lasting several months at a time. The ability to travel under ice and reach depths of 6000 metres will enable Boaty and friends to explore 95% of the ocean. Boaty and similar autonomous vehicles will help oceanographers investigate the processes driving change in the Polar Regions, including the extent of the ice melt, and conduct a range of research in the Arctic and Antarctic oceans without the need for the constant presence of a research ship. Scientists won’t need to wait to get access to the data, since Boaty will periodically surface and transmit the data back via a radio link.

The marine robot fleet at NOC is one of the most capable in the world, and by working with government and industry partners we are able to translate this capability into more cost-effective and environmentally-friendly marine observing, while also supporting regional and national growth in this rapidly growing sector.

Boaty was deployed on a Thwaites Glacier expedition to help researchers understand what is causing ice loss from the glacier and better predict how its deterioration could contribute to sea level rise. The expedition was part of the TARSAN project, a 101-day ship-based expedition - a major global collaboration led by the government science agencies of the UK and USA. Partially funded by 10% for the Ocean through a philanthropy partnership with the NOC, the expedition saw Boaty McBoatface travel over 40km under the Dotson Ice Shelf measuring currents, turbulence and other properties of the water temperature and salinity.
Read more here: https://noc.ac.uk/news/boaty-mcboatface-returns-thwaites-glacier

2021 Further trials have tested the ALR capabilities of being deployed for up to three months and reaching depths of up to 6,000 m, this opens new opportunities for lower cost shore-based scientific missions and under-ice exploration. Development of new navigation features will also allow scientists to research areas that could not previously be reached by boat, such as under and up close to melting icecaps. This trial tested new technologies that will be used to deliver a ground-breaking science expedition in 2022 to explore the melting Thwaites Glacier.
Autosub A2KUI is now in the final stage of its work up to open ocean trials, ahead of its anticipated commissioning into the National Marine Equipment Pool, where it will provide UK scientists with access to the latest in high-power autonomous platform technologies, for deployments anywhere in the world’s oceans.

The latest Autosub Long Range (ALR) vehicles have completed their first round of commissioning trials in the waters of Loch Ness, Scotland, marking a major milestone on their journey to active service.
Read more here: https://noc.ac.uk/news/latest-noc-autosub-completes-loch-ness-trials

Boaty was deployed in the southern Weddell Sea as part of the Filchner Ice Shelf System Project and spent a total of 51 hours under the Antarctic ice, travelling 108km over the duration of the deployment. Boaty reached water depths of 944 m, and spent 20 hours exploring beneath a section of the ice shelf that was 550m thick.

Boaty McBoatface will be ‘flying’ through a deep current in the Southern Ocean that originates in Antarctica, as part of the DynOPO project. Boaty will collect data on the speed of the Antarctic Bottom Water flow, as well as the level of turbulence within the submarine waterfalls and rapids it travels through. These data will be sent onto scientists via radio-link in order to help them understand the influence these features have on mixing between different layers of the Southern Ocean, which will shed light on how the ocean is responding to global warming. Antarctic Bottom Water fills in the abyss of most of the world ocean’s basins, so understanding how it traps and releases heat is vital to determine how global climate will change.

Professor Alberto Naveira-Garabato, from the University of Southampton, who is leading the DynOPO project, said “Autosub Long Range is much better equipped for this task than ship-based instrumentation, because it can follow the pathway of Antarctic Bottom Water away from Antarctica while it directly measures how quickly the water flows and how rapidly it mixes.”

Boaty completed its first Antarctic mission beneath the waves of the Southern Ocean this week. During the deployment on Tuesday, Boaty was under water for nearly 30 hours, following a pre-programmed route, before surfacing for fine-tuning by the engineering team on Wednesday. BAS oceanographer Dr Povl Abrahamsen captured the first deployment and retrieval on video.

A future aim for Boaty McBoatface will be to attempt the first-ever crossing of the Arctic Ocean under ice, which will provide a major technical challenge, but has the potential to deliver a step-change in scientists’ ability to observe change in this vital region.

You can also learn about Boaty’s adventures through the Polar Explorer Programme. 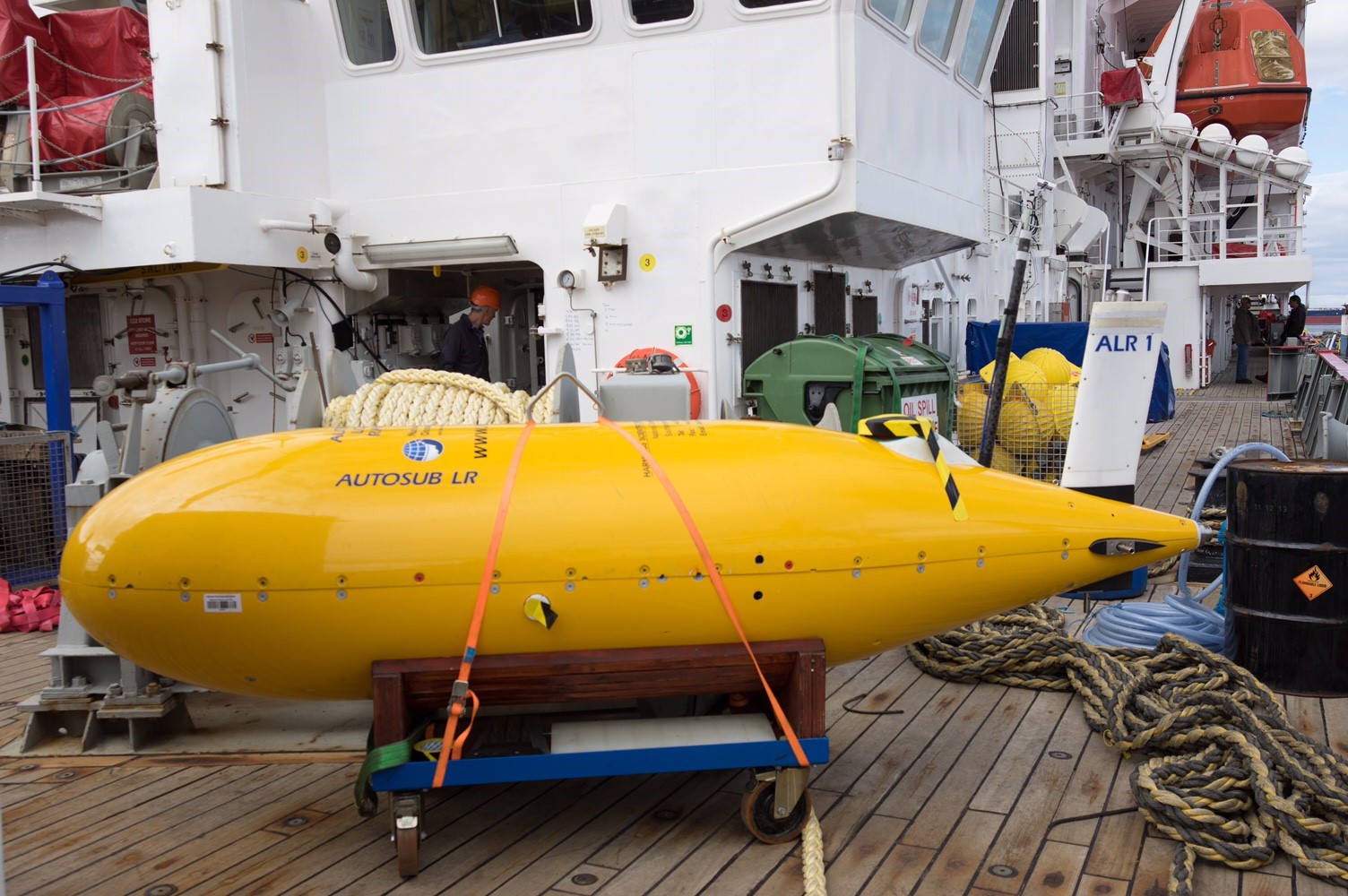 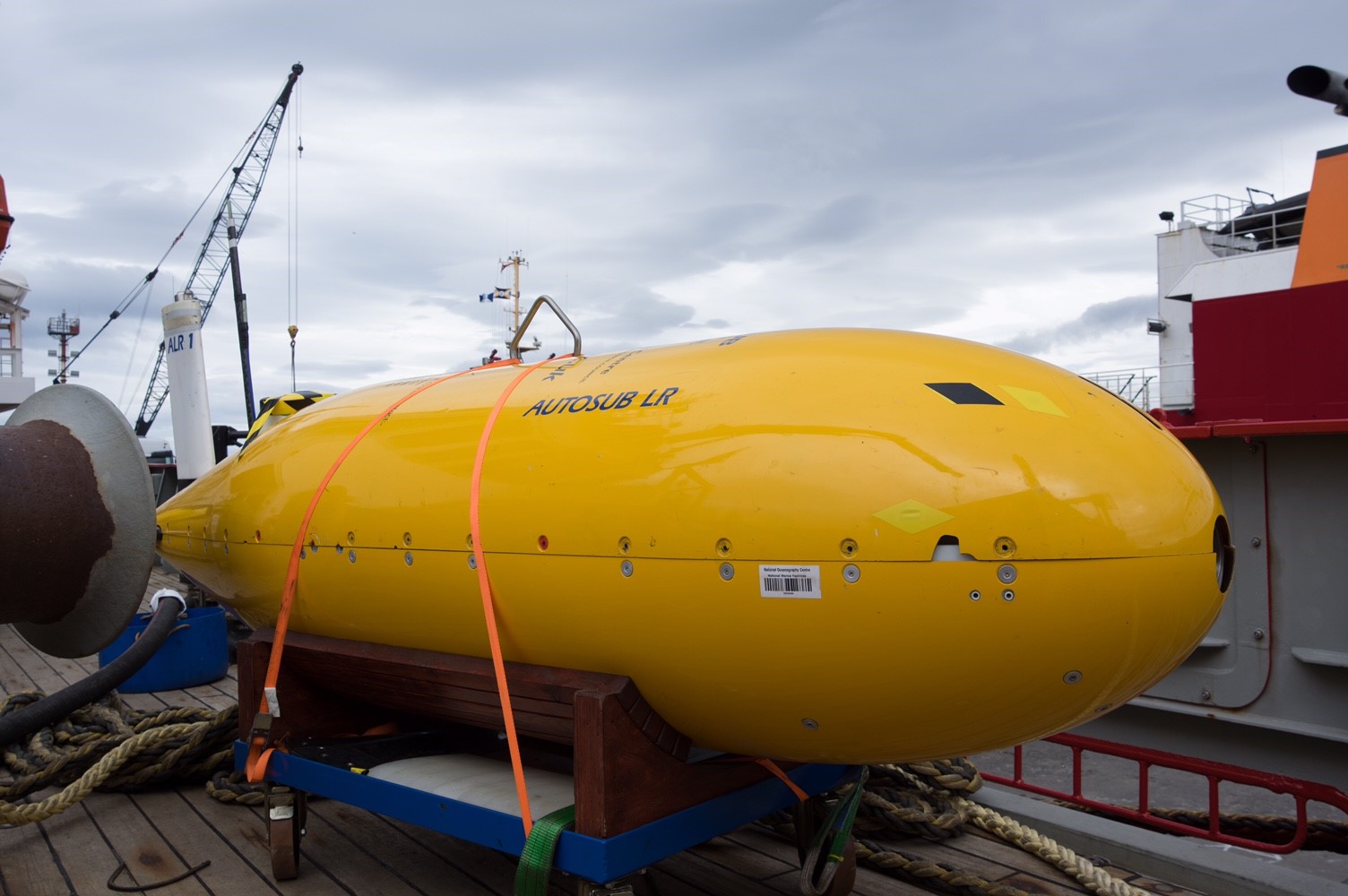 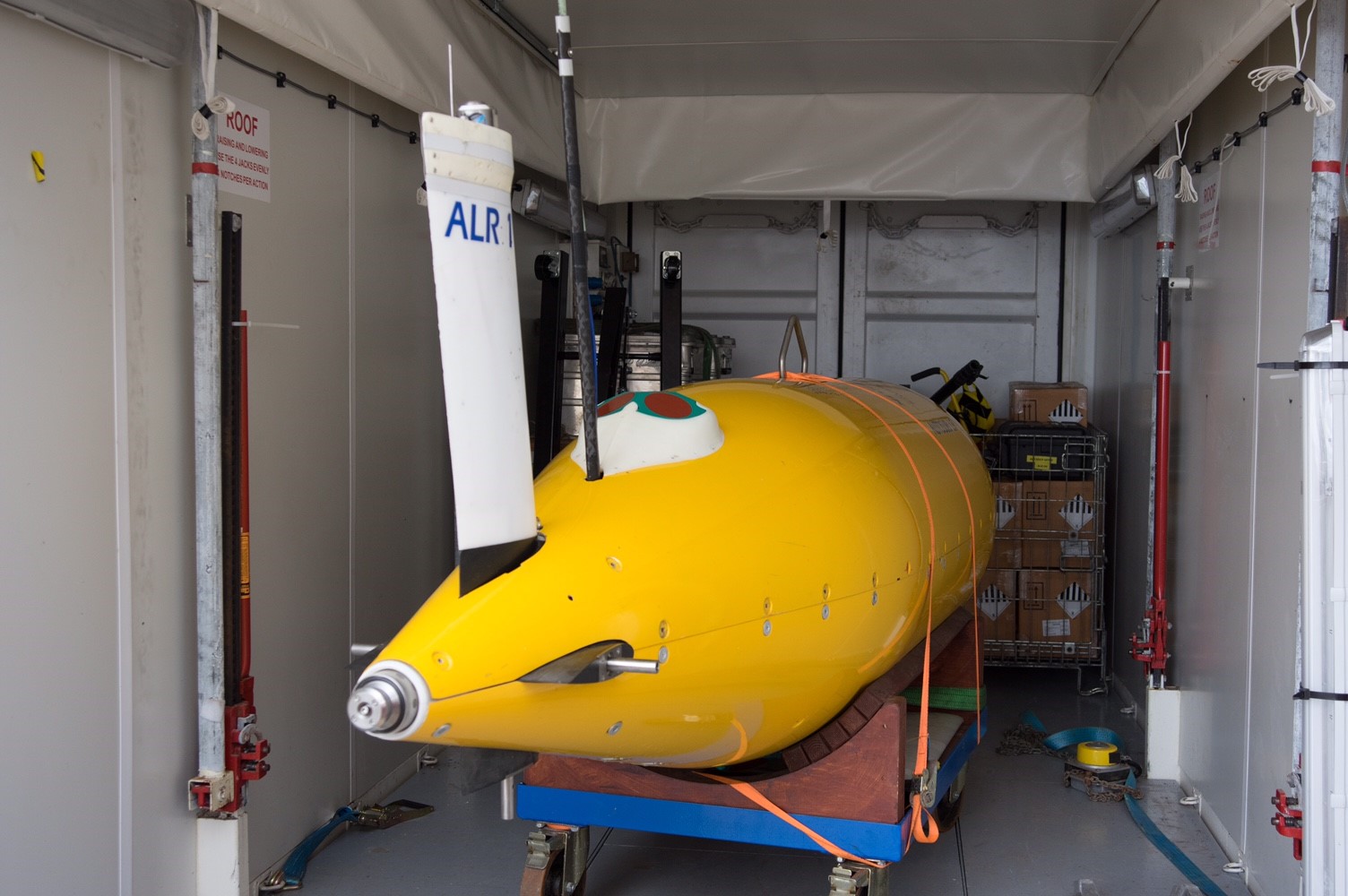 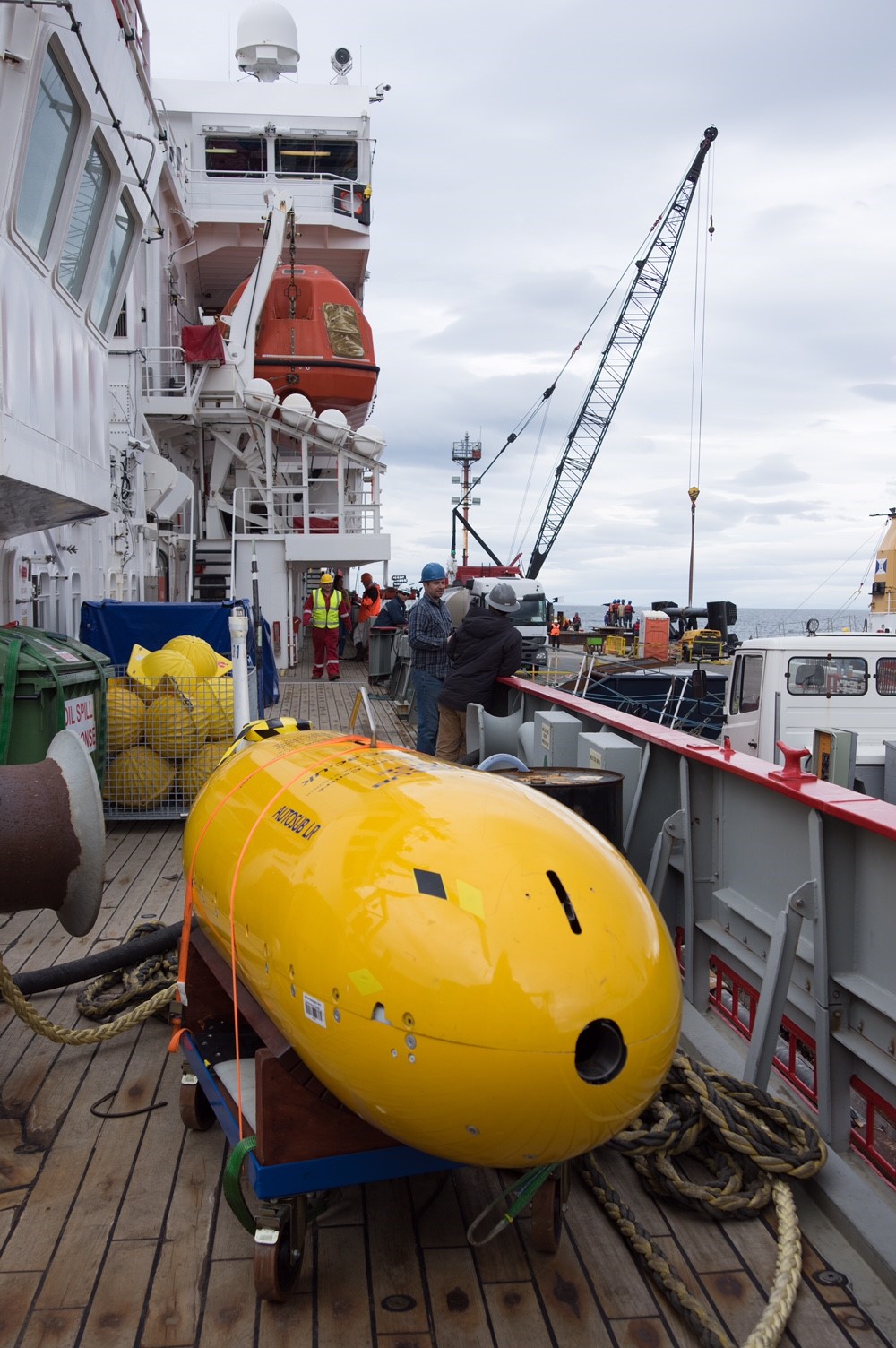