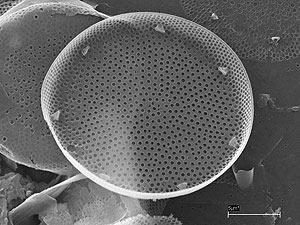 Knowledge of how phytoplankton community structure varies in space and time is fundamental to our understanding of the ocean’s uptake of carbon dioxide, without which global warming would further accelerate.

The movement of ocean eddies and other surface water masses over short timescales causes rapid changes in the community composition of marine algae (phytoplankton) in the sunlit upper ocean, according to new findings.

The research, which was conducted by scientists of the National Oceanography Centre (NOC), spotlights intimate links between surface conditions and deep-sea ecosystems.

Phytoplankton living in the surface ocean harness energy from sunlight to build organic compounds such as sugars using carbon dioxide drawn from the atmosphere. They do this though the process of photosynthesis using light-sensitive ‘photopigments’.

The most widely known photopigment is chlorophyll, which is what makes grass green. However, a wide variety of photopigments occur in phytoplankton, some of them providing protection against the damaging effects of excess sunlight.

“Pigment data are crucial for achieving a comprehensive understanding of the phytoplankton community,” said Dr Denise Smythe-Wright of the NOC.

The organic-rich remains (phytodetritus) of dead phytoplankton sink down through the water column as ‘marine snow’. This is an important component of the ‘biological carbon pump’, by which carbon is exported to the deep ocean.

“The amount of organic material reaching the seafloor depends on the type and abundance of phytoplankton present in surface waters,” said Smythe-Wright. “Knowledge of how phytoplankton community structure varies in space and time is therefore fundamental to our understanding of the ocean’s uptake of carbon dioxide, without which global warming would further accelerate.”

Previous studies using sediment traps have shown strong regional and seasonal variation in the amount of organic matter reaching the deep sea at the PAP site. However, Smythe-Wright and her colleagues focused on phytoplankton community variation in the top 100 metres of the water column.

They found that the abundance and types of phytoplankton present in the surface waters of the PAP observatory changed from day to day. For the first five days of the survey period, the community was dominated by large diatoms, while on other days smaller types of phytoplankton such as cyanophytes and prochlorophytes were more prevalent.

“We believe that these changes were caused by movement an eddy and the complex flow of other water masses over short timescales, which also resulted in marked changes in temperature and salinity,” said Smythe-Wright.

In addition to affecting the amount of organic matter reaching the seafloor, variation in phytoplankton community also affects its quality, which may favour some deep-sea organisms over others.

For example, the pigment zeazanthin characteristic of cyanophytes and some prochlorophytes is important for the sexual reproduction of Amperima rosea, a species of sea cucumber, or holothurian, commonly found on the PAP seabed.

“Observed changes in the abundance of Amperima rosea could be related to the dominant surface water mass. Conditions that favour blooming of zeazanthin-producing phytoplankton will increase supply of this pigment to the seafloor, allowing Amperima to reproduce and flourish,” said Smythe Wright.

This work is a contribution to the European Project EuroSITES and the Natural Environment Research Council, UK, project Oceans 2025.

The researchers are Denise Smythe-Wright, Stephen Boswell and Young-Nam Kim (NOC), and Alan Kemp of the University of Southampton’s School of Ocean and Earth Science based at the National Oceanography Centre, Southampton.