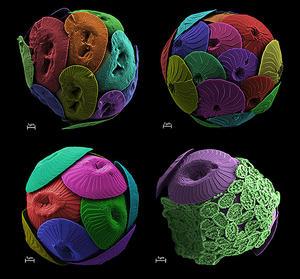 Coccolithophores are group of diverse, microscopic, single-celled algae found throughout the world’s oceans. They are unique because they form ‘shells’ out of calcium carbonate (i.e., chalk); as these shells sink through the water column to the seafloor, they export carbon, forming a key component of the carbon cycle in the ocean. Through this the process, fossil ancestors of modern coccolithophores formed huge chalk deposits, which now make up the White Cliffs of Dover.

However through the impacts of climate change and ocean acidification on the modern ocean, coccolithophores face an uncertain future. Here we will examine how we can combine palaeontology, laboratory cultures and research cruises to attempt to understand the role of different species of coccolithophores in the ocean.