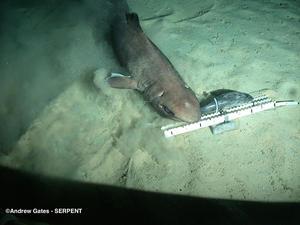 You’re a mile down. It’s cold, dark and the pressure is crushing. The light from surface waters is almost a distant memory. There are no plants down here and food is scarce. Life does exist but it’s nothing like we are used to at the surface. Looking more like a toddler’s imaginative scrawling than anything Darwinian selection could ever determine, these fish are beautifully weird and richly diverse. And reigning over these waters as top predators: sharks. Not just any sharks, these are the deep-sea sharks.

This talk will introduce you to some of these deep-sea sharks and we will see the remarkable ways that they have adapted to this challenging environment. We will also learn that the traits that make these sharks successful predators are the same reason that they are the most vulnerable group of sharks to the ever-expanding operations from fisheries.

Christopher is a PhD student at the University of Southampton and is based at the National Oceanography Centre. With a background in zoology and marine biology, much of Christopher’s academic pursuits have revolved around sharks. His work has included tracking blue sharks off the UK/Europe, studying the shark nurseries of the Bahamas and studying sharks around a remote Atoll in the Indian Ocean. His current research is now concentrating on unravelling the feeding and movement behaviours of some of the world’s deepest living sharks.