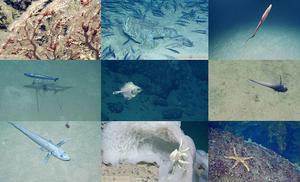 Seamounts are underwater mountains rising more than 1000m from the abyssal plain. These are exceptional areas of biodiversity and hotspots of endemic species.

Links between topography and flow create special conditions for plankton and exceptional foraging areas for fish and other top predators, such as tunas, marine mammals and seabirds.

Overfishing around seamounts is an increasing concern for the fisheries authorities and scientific community. The aims of seamount surveys have been focused on the biodiversity linked to these geological features, and to investigate the human impact on ecosystems.

The Gettysburg and Ormonde seamounts constitute the Gorringe Bank, which rises from over 5000m to a few tens of metres depth. These two prominent geological features are located in the Eurasian and African plate convergence, 150 nautical miles WSW of Portugal.

Despite the several surveys undertaken in the Gorringe Bank over the last few years, the marine fauna remains little or almost unknown below 100 metres. In the framework of the E/V Nautilus Exploration Program, the Gettysburg and Ormonde seamounts were revisited. A collection of nearly 5000 photos of the seafloor was taken covering depths ranging from around 3000m to near the summit. More than 55 fish species were observed, such as scavenging demersal fish, deep-water sharks, rays and chimaeras. There were also corals, sponges, crabs, brittle-stars and sea-urchins. The image analysis enabled an exhaustive characterisation of marine life from the Gorringe Bank.

Our results support the view of the Gorringe Bank seamounts as biodiversity hotspots and their possible biogeographic importance as ‘stepping stones’.

Since 2010, he participated in four research cruises in NE Atlantic seamounts and the Portuguese south coast. His main research interests include deep-sea ecology, biodiversity and taxonomy. Currently, Rui is PhD student in co-supervision between the Graduate School of the National Oceanography Centre Southampton, CESAM/UA and CCMAR/UAlg, focus his research in changes in deep-sea benthic communities and fisheries.