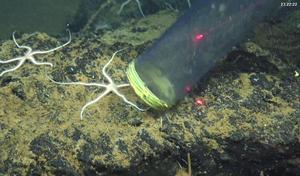 Secret life of a new brittlestar from the Antarctic deep sea, 19.30pm at the National Oceanography Centre in Southampton –

Brittlestars or ophiuroids are close relatives of the starfish you find in rock pools along Britain’s shores and can be found in many marine environments, including the deep sea where they are often important contributors to the sea-floor community. The deep sea covers a vast proportion of our planet yet is poorly understood and new species are continually being discovered. The brittlestars in this talk were found in a recently discovered crater in the Antarctic deep sea, close to an area of active hydrothermal vents. The brittlestars are probably new species, with nothing being known about their ecology. This talk explores their ecology for the first time, including their population structure, reproduction and diet. The continual discovery of new species, such as these brittlestars from the Antarctic deep sea, demonstrates how little we know about this fascinating environment and just how much there is left to discover.

Rachel Boschen is in the final year of an integrated undergraduate masters in marine biology at University of Southampton. She has spoken in the marine life talk series three times previously and has been co-organiser for talks since January 2011. This will be her last marine life talk, as she is leaving for New Zealand at the end of July to study for a PhD in the ecological effects of seafloor massive sulphide mining.