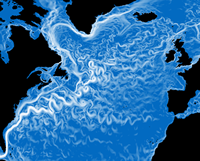 The Atlantic Meridional Overturning Circulation, Its Nature, and Implications for Observations

The so-called Atlantic meridional overturning circulation (AMOC) has been a major focus of studies of present, past, and future climate states. Because only fragmentary observations of its nature and variability exist, the discussion has been dominated by model results. Here advantage is taken of a nearly-20-year least-squares fit of a general circulation model to global oceanic data sets to describe the decadal variability structure of the AMOC and its predictability. Although the extent to which the results are applicable to century and longer variations remains obscure, the complex spatial and temporal structure of ocean circulation variability more generally, suggests that uses of integral measures of the circulation are inadequate, and that any real understanding will require more extended observations of the three-dimensional global circulation extending over many years.

The lecture will take place in the Nicholson Lecture Theatre (Nicholson Building). After the lecture the audience is invited to interact with the Proudman Lecturer in a less formal atmosphere, over refreshments served in the Cath Allen Room of the Joseph Proudman Building.

Carl Wunsch is the Cecil and Ida Green Professor of Physical Oceanography at MIT. His degrees are from MIT (mathematics and geophysics) and he has spent his professional career there. He has had two year-long sabbaticals at Cambridge (Dept. of Applied Mathematics and Theoretical Physics) and others at UCL, the Oceanography Centre in Southampton, GRGS-Toulouse, and Harvard University.

Carl has worked on many aspects of physical oceanography and its climate implications, with emphasis on the global-scale, including satellites and acoustic tomographic observation methods. He was an organizer of the World Ocean Circulation Experiment, chaired the science committees leading to the flight of altimetric satellites, and is deeply involved in the analysis of the oceanic general circulation and its climate influences including aspects such as sea level change, and the interpretation of the paleoceanographic record. He is a member of the National Academy of Sciences, a foreign member of the Royal Society of London, a Fellow of the American Academy of Arts and Sciences, American Philosophical Society, American Geophysical Union and American Meteorological Society and has received a number of awards including the Bowie Medal of the American Geophysical Union 2006 and the Prince Albert 1st Medal. Carl is the author or co-author of many scientific papers and the author of several books including Ocean Acoustic Tomography (with W. Munk and P. Worcester); The Ocean Circulation Inverse Problem; and Discrete Inverse and State Estimation Problems, all with Cambridge.