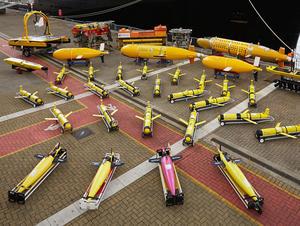 The competition, run by the Natural Environment Research Council, in partnership with the Defence Science and Technology Laboratory (DSTL) and Innovate UK, will see funds made available to assess and develop novel adaptive autonomous ocean sampling network (AAOSN) management systems. These systems will need to be capable of coordinating a suite of marine autonomous systems, enable the gathering of data from the ocean over periods of several months and have the ability to track and sample dynamic features.

The competition will run in two phases: phase one opened on 2 September for feasibility studies, with contracts to be awarded, for those selected, in mid-December and completed by 31 March 2015. Up to five phase one studies will be funded up to a cost including VAT of £50,000 each. After a review of the outcomes of the phase one studies, selected participants will be invited to apply for phase two for the development of prototypes, which would be capable of undertaking demonstration missions at sea. It is expected that phase two will make £1.2M available for up to two selected projects.

This is the second SBRI competition the NOC has overseen. Last year’s competition to develop long endurance marine unmanned surface vehicles was won by ASV Ltd of Portchester and MOST (AV) Ltd of Chichester. Both companies have had considerable success in the sector since and are now selling the vehicles developed through the competition into the market.

Geraint West, Head of National Marine Facilities at the NOC, said “We’re very excited that NERC is again teaming with Innovate UK and DSTL to launch a SBRI to develop new technologies to support better understanding of the ocean environment. We were extremely pleased with the success of our first SBRI and the mutually beneficial relationships we developed with businesses working in advanced technology. Consequently, we’re now really looking forward to seeing what industry comes up with in response to this new challenge.”

Mario Brito, Senior Risk Analyst for the NOC’s Marine Autonomous Robotic Systems group said “Over the last 20 years marine autonomous systems operations have focused on single platform deployments, with a high level of automation, but very low level of autonomy. In this call, we are looking for solutions that will enable marine scientists to monitor and sample dynamic features using multiple platforms in an adaptive way. We want to be able to do this in a systematic manner using the existing platforms that we operate. In addition to helping to address key marine environment and climate problems faced by society, this challenge should also inspire future generations of marine scientists and engineers.”