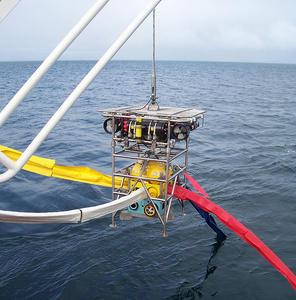 The National Oceanography Centre (NOC) has been awarded €1.8 million to study massive sulphide deposits on floor of the Atlantic Ocean, three kilometres beneath the surface. The research is part of a wider, international programme to assess seafloor mineral resources that has received €10 million funding from the European Commission.

A new frontier for seafloor mineral resources is opening up due to dramatic growth in demand for metals essential for modern societies. To exploit these resources requires major advances in technology as well as a breakthrough in understanding how and where they form.

The €1.8 million research grant is to enable geologist Dr Bramley Murton from NOC’s Marine Geoscience Group to lead an international partnership studying the evolution, preservation and sub-surface expression of massive sulphide deposits on and under the floor of the Atlantic Ocean.

Dr Murton said “These massive sulphide deposits are formed by high-temperature hydrothermal fluid flow on top of volcanoes forming the mid-ocean ridge crest, thousands of metres beneath the surface of the sea. For the vast majority of these deposits, hydrothermal venting is now extinct and they are partially hidden by a thin covering of sediment.

“Our challenge is to develop methods to locate such deposits on the seafloor and to identify how they have evolved since their formation.

“The deep ocean floor contains resources of minerals that are vital to modern civilisation. These include elements that are critical to emerging green technologies and the digital economy. Photovoltaic panels used for solar power generation, for example, require the element Tellurium. Wind turbines require rare earth elements for their generators, and electric vehicles require Cobalt and Lithium in their batteries. These are critical elements needed by European and UK industries and society in general, however, their abundance is scarce and their supply relatively insecure”, he said.

The European Commission (EC) aims to use research and innovation to help address the need for a secure and sustainable supply of these raw materials to the EU. In lieu of this, the EC has awarded two multimillion-euro programmes for research into deep sea mineral resources, of which NOC has succeeded in winning significant funds from both.

One of these is a €10M programme Blue Mining which, with its scientific and industrial partners, will focus on deep sea resources over the next four years. The aims of Blue Mining are to develop new and innovative methods for exploring and assessing ocean floor mineral deposits, as well as developing low carbon, low impact and sustainable extraction technologies. The €1.8 million research grant awarded to NOC is part of this programme.

The international partnership includes British, German, Portuguese, Dutch, Norwegian and Belgian researchers who will spend several months at sea deploying a variety of instruments including autonomous underwater vehicles (AUVs). These AUVs will be fitted with newly-developed electrical sensors to detect minute fluctuations in electrical current caused by the presence of the mineral deposits on the seafloor.

The AUVs will survey a 50 kilometre by 10 kilometre wide section of the Mid-Atlantic Ridge including a number of known extinct hydrothermal mineral deposits. Sub-surface imaging of these will use a combination of underwater seismic and electromagnetic instruments. Surface surveying and sampling will be carried out using NOC’s Robotic Underwater Vehicle HyBIS followed by sub-surface drilling.

Dr Murton said: “The geophysical imaging and seafloor surveys will be conducted during a five-week-long cruise in 2015. We will conclude by deploying the British Geological Survey’s robotic seafloor drilling rig (RD2) to a depth of 3500m where it will core 50-metre-deep holes to recover mineral and rock cores and deploy down-hole sensors to collect in situ data from the interior of the deposit.

“The scientific team will study the samples and data ashore where, at NOC, geotechnical experiments will reveal the characteristic electrical, magnetic and seismic properties of the deposits allowing us to better interpret the field data.”

Dr Daniel Jones from NOC’s Ocean Biogeochemistry and Ecosystems Group leads one of the MIDAS work-packages. He said: “The sustainability of the nascent deep-water mining industry relies on understanding of the operating environment and development of effective strategies and technologies for impact assessment, management and mitigation.” It is anticipated that much of the MIDAS work will feed directly into informing policy decisions at government and intergovernmental levels.

Dr Bramley Murton and Dr Daniel Jones will be guest speakers at the Deep Sea Mining Summit being held from 17-18 March at the Cumberland Hotel in London. It is an international forum for deep sea mining professionals such as offshore extraction engineers, mining companies, members from the scientific community and those working in allied industries.

Dr Murton will be speaking about state-of-the-art exploration and evaluation methods for seafloor massive sulphide deposits, and will present a case study from the discovery of the deepest hydrothermal systems on Earth.

Dr Jones will talk about tools for long-term environmental monitoring in the context of deep sea mining, using data from the European Multidisciplinary Seafloor and water column Observatory (EMSO). He will also give an update on the MIDAS programme. 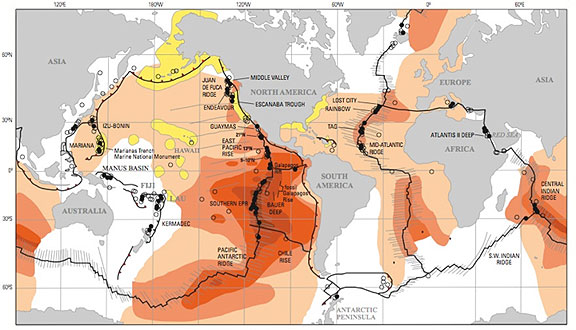