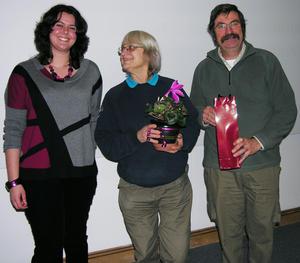 The first Marine Life talk of 2011 held at the National Oceanography Centre in Southampton was dedicated to the achievement of Dr Ken Collins and Jenny Mallinson, who had the inspiration to start the programme of talks back in 2000 and the tenacity to keep it going for ten years.

The talks are held on the first Thursday of the month, every month. Ken and Jenny have organised 125 talks in the last ten years, often stepping into the breach and putting on an interesting talk themselves if ever there was a gap in the programme.

During the celebratory talk, SOES marine biology undergraduate Rachel Boschen showed examples of the many and varied talks that have been held in the intervening years and then made a presentation to Ken and Jenny in appreciation of their hard work.

Rachel, who has a passion for the marine environment, has taken on the task of organiser. Previously in the series, Rachel has spoken about teaching diving in the Caribbean and the rehabilitation of seals and turtles.