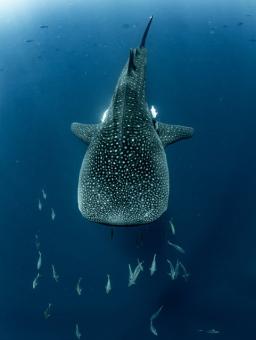 Whale sharks are the world’s biggest fish and swimming with them is probably on your bucket list. They also are an endangered species on the IUCN Red List, slowly disappearing from our oceans due to growing threats such as plastic pollution. Madagascar is the world’s fourth largest island, home to endemic lemurs, chameleons and frogs. But whale sharks? Until recently, no research had been done on the species in Madagascar. Against all odds, researcher Stella Diamant decided to find out back in 2015, and launched the Madagascar Whale Shark Project. To date, the project has identified about 300 whale sharks and seasonally welcomes volunteers to assist with their observations.

Stella Diamant is a marine biologist, and spends her time between Madagascar and her home country, Belgium.

In 2015 she left her job in plastic pollution to research whale sharks in Madagascar, a country she is very familiar with following a work stint with WWF in 2011. Initially a wild guess, Stella quickly realised that Nosy Be was a key feeding area for the endangered whale shark, and benefited from the support of the Marine Megafauna Foundation to run a first pilot season in 2016 and deploy satellite tags.

Following the success of the season, she founded the Madagascar Whale Shark Project, and since 2018 has been dedicating her time exclusively to the project, setting up an educational programme for local children, recruiting Malagasy staff and implementing a code of conduct in Nosy Be. To date, Stella and her team have identified more than 300 different whale sharks. Stella’s findings and achievements have been widely shared amongst international media: such as BBC, The Telegraph, Mongabay, Lonely Planet, Diver Magazine etc. Stella currently is working on her data from the 2018 season, while scaling up the project and spreading the word about Madagascar’s incredible wildlife. Stella also is a keen adventurer, wildlife photographer and artist.

PLEASE NOTE SECURITY MEASURES FOR ENTERING DOCK GATE 4
Visiting the NOC: As the NOC is located within the Port of Southampton and entry is via Dock Gate 4 Port Security require all visitors bring along with them their confirmation ticket and a valid form of photographic ID (Driving License / Passport). The Port of Southampton is the Strategic Authority for the implementation of security within the port area where the NOC is located.

There are a number of designated visitor parking spaces available at NOC. If these are full after 5pm please drive to the staff car parks barriers, access can be given by pressing the intercom button in the box next to the barrier, on requesting entry you will be asked for Name and Car Registration number and the barrier will be lifted.

Please do not park in areas not designated for parking and ensure roadways are kept clear.

The Marine Life Talks are usually held on the first Thursday of each month (except in January) at 7pm in the Henry Charnock Lecture Theatre, National Oceanography Centre. When you arrive, please sign-in outside the lecture theatre on level four.

(There will not be a talk in April)