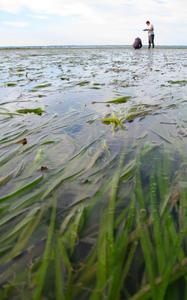 Mud, Maps and Marine Conservation Zones: The role of the Hampshire and Isle of Wight Wildlife Trust in marine conservation

In 2015, up to six new Marine Conservation Zones could be designated in the Hampshire and Isle of Wight region, providing much-needed protection for some of our most important marine habitats and species. Tim Ferrero will explain the marine conservation work of the Hampshire and Isle of Wight Wildlife Trust with a particular focus on the role it has played in the development of Marine Conservation Zones and thoughts on their future implementation and management.

Since August 2013, Dr Tim Ferrero has worked for the Hampshire and Isle of Wight Wildlife Trust (HIWWT) as Head of Marine Conservation, looking after the Trust’s small but dedicated marine team and overseeing the Trust’s volunteer survey work, advocacy and marine engagement and education – all focused on delivering the Wildlife Trusts’ ‘Living Seas’ vision for healthy, productive and sustainable marine habitats and species, recovering from past declines and adapting well to climate change.

Prior to his move to HIWWT, Tim worked for over 23 years at the Natural History Museum in London as a researcher and consultant on the ecology and taxonomy of marine free-living nematodes. Tim’s work focused on the role of anthropogenic impacts on estuarine and coastal systems and on the processes driving biodiversity in the deep sea. Tim’s work has taken him all over the world, including five memorable trips to Antarctica and by way of contrast, once undertook fieldwork in Kuwait in temperatures of 54°C, but he is very happy to be back on the Hampshire coast where he grew up in the seventies.