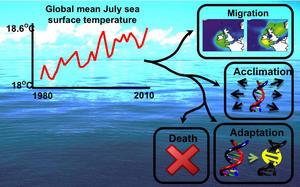 Physiology, the study of how life functions, can tell us great deal about how organisms are persisting in their current habitats. It can also help us understand how organisms are responding to currently changing environments, and predict how they might respond under projected climate change scenarios.

James will introduce the general concepts of movement, acclimatisation, and adaptation, before discussing his own PhD research which attempts to determine whether shallow-water species can escape from climate change into the deep sea.

James Morris grew up on the coast in South Devon and was enamoured by the sea from a young age. Studying Marine Biology was an easy choice, and he graduated with an undergraduate degree in the subject from Newcastle University in 2009. James then moved to Southampton in 2010, obtaining a Research Master’s degree in Ocean Sciences at the University of Southampton studying tiny deep-sea mussels from the Southern Ocean. He has remained at University of Southampton and is now in the final stages of his PhD, where his research focusses on the physiological limits to deep-sea migration in shallow-water marine species.