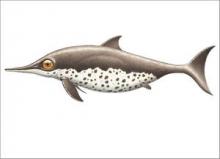 Fossil marine reptiles from the age of dinosaurs

Just a few groups of reptiles live in the worlds oceans today. Back in time – in the age of dinosaurs around 100 million years ago – a wide variety of marine reptile lineages roamed the oceans, including some of the largest predators ever to evolve. In this talk, University of Southampton vertebrate palaeontologist will discuss what reptiles are and will overview marine reptile groups that lived in the past...

Gareth Dyke is a vertebrate palaeontologist who grew up in Southampton and has worked at the University since 2011. Before, he worked in Dublin for 10 years and at the American Museum of Natural History in New York. He has collected and described fossil reptiles from all over the world, most recently in Romania, Morocco and Kazakhstan.