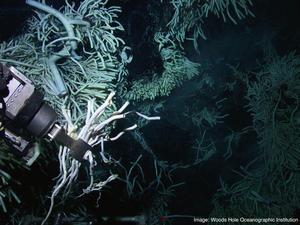 Polychaete worms are multi-segmented, bristly worms that dominate almost all marine habitats. They are even found within the toxic oases of hydrothermal vents and cold seeps, where tube-building types often dominate. Remarkably, fossils of worms from ancient deep-sea vents date back 430 million years!

During this talk Magdalena will delve into the toxic underwater oases of hydrothermal vents and cold seeps to tell you about the worms we find there, how they fossilise (sometimes very quickly!) and what their fossils tell us about the ancient palaeo-environments within which these worms lived.

Magdalena Georgieva: Before commencing her PhD, Magdalena Georgieva studied Environmental Sciences for four years both in the UK and in Australia, and worked for The WorldFish Center, Philippines and the RSPB. She is now in the third year of her PhD studying the morphology, ultrastructure and palaeontology of polychaete worm tubes from chemosynthetic environments. She is interested in the evolutionary history and taphonomy of polychaetes within these environments, as well as their palaeoecology.