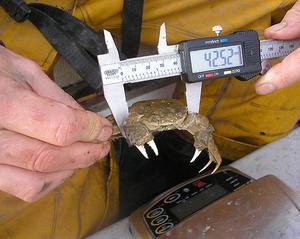 The invasion of the River Thames by the Chinese mitten crab, Eriocheir sinensis H. Milne Edwards, 1853, has been documented since 1996. Mitten crabs numbers have been shown to dramatically increase from this period and the population has widely dispersed westwards upstream. Commercial exploitation of this crab population has been viewed as a possible method of control because in SE Asia mitten crabs are considered a culinary delicacy.

During 2006, trapping trials were undertaken comparing baited pots and fyke nets. Unexpectedly, fyke nets proved to be the most efficient method for collecting Eriocheir, but they also trapped large numbers of the European eel, Anguilla anguilla (Linnaeus, 1758). However, the European eel has recently been listed in Appendix II of the Convention on International Trade on Endangered Species. The decline in eel populations across Europe has led to the European Commission initiating an Eel Recovery Plan (Council Regulation 2007) in an attempt to return the European eel stock to more sustainable levels of adult abundance and increase glass eel recruitment.

Consequently, starting a mitten crab fishery with the possibility of depleting an eel population further was not acceptable especially since the EU requested that each Member State establish a regional Eel Management Plan. A key target for recovery was to restore successful migration of spawning stock to 40% of historic levels and pre-dating anthropogenic interference. In addition to trapping eels, the 2006 mitten crab survey also documented the fact that the fykes nets were trapping a flow of submerged plastic in the Thames. This presentation will review how fyke nets can be modified to release eels, but retain mitten crabs and highlight the hidden problem of submerged plastic in the Thames.

Paul Clark started as an Assistance Scientific Officer in the Crustacea Section, Natural History Museum on 19 November 1974 and therefore he has just started his fortieth year at South Kensington! During this period, duties undertaken have included the curation of decapod collection, contract work and research (mainly brachyuran crabs) resulting in the publication of over 210 research papers, books, edited works, joint reports and other publications.

For the last 10 years Paul’s work has focused mainly on crustacean research, some eel studies and plastic litter being thrown in for good measure.