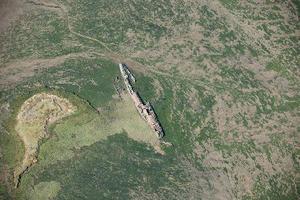 Climate change and recycling are nothing new, and both played their part in destroying ships and revealing or preserving their remains in unexpected locations.

The perennial topic of the English climate has had its impact on our maritime nation, with regular extreme weather events causing shipwrecks in sometimes surprising ways.

The English landscape also created and destroyed ships in both the sail and steam eras, influencing how ships were built, their manner of loss, and the ways in which they returned to the inshore landscape.

Serena Cant is the maritime data specialist in the Heritage Data Management department, English Heritage. An art historian by background, she began her career as an archivist with the Royal Commission on the Historical Monuments of England (RCHME), followed by a supposedly temporary move to the RCHME’s maritime team 17 years ago, which has developed into her current role today at English Heritage. She is responsible for editing and updating a huge database of over 37,000 wrecks, both documented wreck events and archaeological remains, with a particular expertise in assessing and interpreting documentary evidence.

Image: Remains of U-boat abandoned on the Kentish marshes, after being stripped and partially broken up in 1921 following surrender. She seems to have formed the nucleus of a hulk assemblage in subsequent years, of which only one other wreck is now visible, thought to be the barge "Swale". (27196/27 19-AUG-2011, (c) English Heritage)