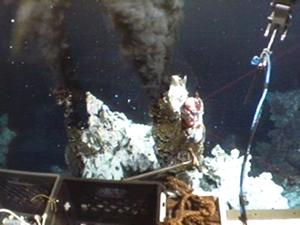 Deep sea hydrothermal vents – a journey to the Southern Ocean

by Leigh Marsh and Laura Hepburn

The discovery of chemosynthetic environments in 1977 is arguably one of the great multidisciplinary oceanographic achievements of 20th century. However, 33 years later, 90 percent of the oceanic ridge system remains unexplored.

With the global mid-ocean ridge system extending some 65,000 km, it is unlikely that its entire length could be examined in detail. With this in mind, the ChEsS (Chemosythetic Ecosystem Science) programme proposed and selected a limited number of target areas chosen for the discovery of new vents and seeps.

One of these key locations is the Southern Ocean, with exploration fronted by the ChEsSo (ChEss in the Southern Ocean) Programme. Using footage from their recent expedition to the East Scotia Ridge, this talk will tell the story of hydrothermal vents; from their initial discovery to the methods we currently use to find and observe them miles beneath the ocean’s surface.

Leigh Marsh graduated with a Masters of Oceanography from the University of Southampton in 2005. Since graduating, Leigh has worked for the Environment Agency, Natural England and more recently as a commercial marine ecologist for a Southampton based survey company. In October 2009, she returned to the NOCS to start a PhD investigating the controls on faunal microdistribution and reproductive development in deep-sea chemosynthetic environments in the Antarctic.

Laura Hepburn is also a PhD student at the National Oceanography Centre, Southampton (NOCS). After graduating as a Master of Oceanography from the University of Southampton in 2008, she began working within the Geochemistry Group of NOCS. Eager to continue research work she successfully applied for a PhD project investigating geochemical controls on microbial processes within chemosynthetic habitats of the Southern Ocean.

Laura and Leigh will be talking about their recent cruise to the East Scotia ridge, from collecting the first samples from hydrothermal vent habitats south of the Antarctic Polar Front, to life onboard the RRS James Cook and the wildlife encountered while sailing through the Southern Ocean.

The National Oceanography Centre is reached via Dock Gate 4 (between Town Quay and Ocean Village).