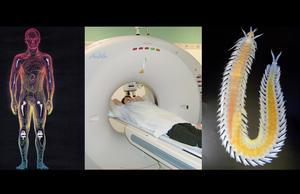 7 October 2010 - X-ray and CT-scanning: 'from patients to polychaetes' by John Dinley and Dr Arnie Drury

On the 8th November 1895, Wilhelm Rontgen discovered the X-ray. The developments of this discovery heralded a new era of medical diagnosis and treatment.

Now the combination of X-rays and computers have carried us into previously unimagined and sophisticated ways of looking at the human body and its organs. This in turn has led to enormous advances in the diagnosis and treatment of many diseases, including cancer, cardiovascular, and spinal disease.

In the last three years scientists at the National Oceanographic Centre and University of Southampton (Dinley, J. et al., 2010) have been at the International forefront of developing CT-Scanning as a method of non-invasive examination and dissection of soft bodied marine worms (Polychaetes). The extrapolation of these techniques means that live animals can be carefully and non-invasively examined in microscopic detail as well as rare museum specimens.

John Dinley is a retired orthopaedic surgeon and is now in his final year as a marine biology PhD student at the NOC. While John is a keen diver and underwater photographer, he has been temporarily returning to his medicine recently as ship’s doctor on the Royal Research Ship James Cook during her scientific ground-breaking cruise to Antarctica this year.

Dr Arnie Drury is a consultant Radiologist at the Royal Bournemouth and Christchurch Hospitals Trust. Arnie is a very keen and accomplished photographer as well as an inveterate traveller. His enthusiasm for travel is now being passed onto his wife Lisa and their two young children, all of whom have recently visited Cambodia and Vietnam.