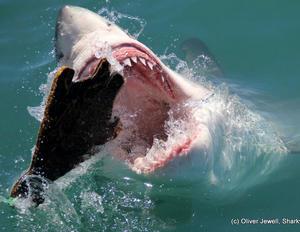 A journey with White Sharks –

This talk will focus around Oliver’s journey as a University of Southampton Undergraduate to a full time researcher and MSc working with white sharks in South Africa.

It will cover their tagging, mark/recapture and environmental research projects, what they have learned and what they are in the process of learning about the species, as well their local initiatives, cage diving and internships.

Oliver Jewell graduated from the NOC in 2008 and headed for South Africa, where he ended up working in Mossel Bay, after a year Oliver moved just up the coast to Gansbaai where he’s been ever since, tagging and tracking white sharks in a bid to understand more about their life histories.

The next Marine Life Talk at the National Oceanography Centre: 4 April 2013