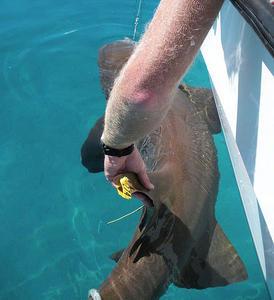 Diary of a fish: How fish tag themselves

Understanding the ecology of fish in our seas is an important goal for both managing the numbers of fish we can catch and for conservation of the fish we don’t want to catch. When faced with a wide expanse of ocean, it can be very difficult to answer questions like “Where do the fish go?”, “What do they eat?”, and “What will happen to them as the climate changes?”. Lots of work has been put into tagging fish, using various kinds of equipment to find out about movement, migration, and what their environment is like in different areas. Tagging, however, is difficult and expensive, and often relies on recapturing the tagged fish at some later.

So what if we didn’t need to physically tag fish to get all the information we need? What if the fish were already recording their own life stories? Fish incorporate the chemical make-up of their food and surrounding waters into their bodies, meaning that they carry around traces of wherever they have been and what they have been eating. By analysing the chemistry, specifically the stable isotopes of carbon, nitrogen and oxygen, of various parts of the fish, we can effectively read the story of where they have been, and what they did when they got there.

Kirsteen MacKenzie is a self-confessed fish obsessive, whose research is based on finding out what fish do, where they go, and how these things change through space and time. She obtained her PhD at the University here after a masters in Marine and Fisheries Science at the University of Aberdeen and an undergraduate Ecology degree at UEA. She has been a researcher at the University of Southampton, NOCS, since 2010, working on revealing the hidden lives of salmon at sea. She came here after a stint working on marine habitat mapping at the JNCC, and has also spent some time in the Bahamas working on shark ecology.

Recordings of previous Marine Life Talks can be found on http://www.youtube.com/user/NOCSnews.

The next Marine Life Talk at the National Oceanography Centre: