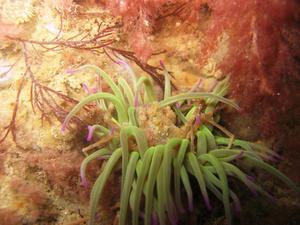 Surf and algal turf – Life on the Boscombe Artificial Surf Reef, 19.30pm at the National Oceanography Centre in Southampton –

Completed in 2009 Boscombe artificial surf reef, the first of its kind in Europe, has been the subject of much debate. Under the water, oblivious to the controversy surrounding it, the marine life of Poole Bay has capitalised on the habitat provided by the ASR, and a flourishing new ecosystem exists just a few meters offshore.

This talk presents data collected by Bournemouth University and partners the Dorset Wildlife Trust Seasearch and the National Oceanography Centre, and tells the story so far of the colonisation of Boscombe surf reef.

The talk will discuss the important questions surrounding the environmental impact of the reef: How does the biodiversity of the surf reef differ from other areas in Poole Bay? Could the artificial surf reef alter the fish community? Are the species colonising the reef native or invasive? And what can be learned from the surf reef that could be used in the design of other artificial structures?

Underwater photographs and video collected from surveys of the reef will be used to illustrate the talk.

Josie Pegg is a Research Assistant in the School of Applied Sciences at Bournemouth University, her specialist areas of interest are non-native species and the impact of human activity on fisheries. She studied Marine Biology at Hull University, during which she discovered that of all the creatures, fish were by far her favourite. She completed her Masters in Environmental Science and Law at Nottingham University following which she worked as a fisheries scientist for the Environment Agency. Josie’s work has taken her far and wide including Bermuda and Madagascar, but she is still the greatest fondness for the life that lurks below the surface of our cool dark waters.