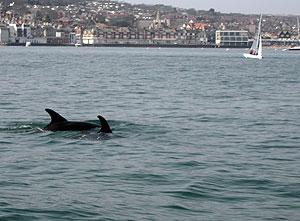 Ed’s talk will be a gentle ramble around the theme of the Durlston Dolphin Project from its inception in 1994 to the present day activities. The emphasis will be on the acoustic aspects of the work and will include information on associated work with the Chesil Beach and the Fleet Nature Reserve and aspects of Ed’s work with the University of Southampton.

The talk will include descriptions of the various cetacean species to be found off the coast of Dorset and the sounds that they make. Other sounds heard during the work will also be included.

The talk will conclude with some crystal ball gazing on the future of the project.

Ed Harland worked for the MoD in AUWE, Portland and its successor establishments for 30 years working on various apsects of underwater acoustics. Projects have included torpedo homing systems, the new generation of surface ship active sonars and looking at the impact of these sonars on the marine environment. When the MoD research establishments were split up Ed moved to the newly formed QinetiQ where he continued working on the impact of sonars on the environment. On retirement in 2006 he started working towards his PhD at ISVR within the University of Southampton.

As well as the paid work Ed has used his underwater acoustic expertise with the dolphin project at Durlston, Swanage and also with the Chesil Beach Nature Reserve.