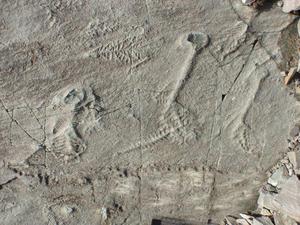 The Ediacaran Biota and the development of modern marine ecosystems –

Life in the modern oceans is abundant and diverse, but it hasn’t always been that way. For almost three billion years following the initial evolution of life, the only inhabitants of the marine realm were microscopic, and largely microbial. Then, some 580 million years ago, large and complex organisms suddenly appear in the fossil record. Known as the Ediacaran Biota, these enigmatic and unusual life-forms, bearing little resemblance to any organisms seen before or since, seemingly dominated the planet for around 40 million years. This domination ended with the ‘Cambrian Explosion’ around 540 million years ago, when modern animal groups can first be recognised worldwide, and the Ediacaran organisms disappear from the record.

The Ediacaran to Cambrian transition through which the Ediacaran Biota lived is arguably one of the most critical periods in evolutionary history, documenting the rapid and irreversible impact of large multicellular organisms, including the first animals, upon marine ecosystems previously dominated by microbial activity. This presentation will chart the course of evolution across this transition; discuss the current state of knowledge regarding the relationships between Ediacaran organisms and true animals; and reveal the fascinating and diverse range of research that is currently being undertaken into this period

Alex Liu is originally from Wolverhampton, and attained his undergraduate degree in Earth Sciences at St Peter’s College, Oxford, before staying in Oxford to study for a DPhil in Palaeontology at Exeter College. The focus of the doctoral thesis was Ediacaran palaeobiology and taphonomy (preservation), and Alex finished that in July 2011. Since then he has been at the University of Cambridge, as a Junior Research Fellow at Girton College, where he's continuing his Ediacaran research as part of a three-year post-doctoral position.

The next Marine Life Talk at the National Oceanography Centre

10 January 2013 – Volcano trickery: how to survive an eruption by Dr Mike Cassidy (Volcanologist)
(Please note: for January only, the talk will take place a week later than usual and will be on the second Thursday of the month)