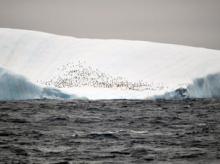 Understanding the scientific basis of climate change – 19.30pm at the National Oceanography Centre in Southampton –

Is climate change real? Is it man made? Is it a problem?

The objective of this talk is to present the key issues about climate change in specific (but not too technical) terms. I hope that this will help with the development of a better understanding of the true meaning and value of messages about climate change from the government, media, and other organisations. I will first discuss the nature of the greenhouse effect on Earth, which keeps the planet habitable, and how humans have affected it. From those foundations, I will then continue to discuss several key feedback processes in the climate system and impacts for the future.

Following his PhD in Geology at Utrecht University, Prof Eelco Rohling worked at the Woods Hole Oceanographic Institution, USA and the National Museum for Natural History in Paris. He came to Southampton in 1994 and was awarded his Professorship chair in 2002.

Eelco’s research interests include climate change over the last million years, natural climate variability, the integration of archaeological records into palaeoclimatology, and changes in deep-sea ventilation and nutrient distribution in relation to organic and inorganic carbon cycles.

He has published over 100 scientific reports and has been an Editor for various scientific journals over the last 12 years. One of his many achievements was the active involvement in the 26-nation International Global Changes Study Programme (IMAGES), which he chaired from 2005-2008. He has been actively involved in teaching the next generation of scientists at University, summer schools and workshops.