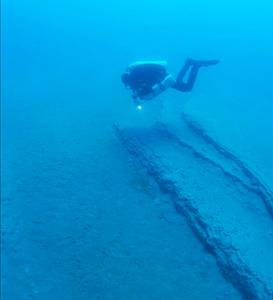 Living the life aquatic: a maritime archaeological odyssey, 19.30pm at the National Oceanography Centre in Southampton –

With Titanic mania sweeping Southampton this month in memory of the 100th anniversary of its demise, Helen will provide a whirlwind tour of the development of seafaring and maritime activity from its origins in the Pleistocene, and our ancestors’ first open water crossings, to the cutting edge technology that maritime archaeologists deploy today.

The technological development and the symbolic role of the ship within society will be explored alongside the developing discipline and challenges of maritime archaeology.

Helen Farr is currently a Leverhulme Early Career Research Fellow within the Centre for Maritime Archaeology at Southampton University. Her research interests include ancient seafaring and island colonization, prehistoric submerged landscapes and the dynamic relationship between people and their changing environment as sea-levels rose during the Holocene. Combining skills in marine archaeology, palaeoevnvironmental analysis and geoarchaeology Helen has projects in the Solent, central Mediterranean and the Indian Ocean.

Helen is on the editorial board for the Journal of Maritime Archaeology where she is also Reviews Editor, an HSE commercial diver and a keen sailor.