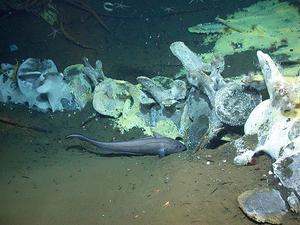 Dinner in the deep sea, 19.30pm at the National Oceanography Centre in Southampton –

The normally food-poor deep sea is punctuated in space and time by organic-rich remains such as the carcasses of dead whales (whale-falls) and sunken wood (wood-falls). Studies have shown that these remains may last for significant periods on the seafloor, providing food and shelter for a diverse range of fauna. Although the tissues of whale carcasses may be consumed quickly by scavenging organisms, their large oily bones may remain on the seabed for several years, perhaps hundreds of years in some instances.

Diva will introduce organic falls and the weird and wonderful animals that live on them, before moving onto her analysis of a newly discovered late-stage natural whale fall found at a depth of 1444 m in a seafloor caldera in the South Sandwich Arc.

She then will touch on her current and future analyses of wood and bone packages implanted in other locations around the world as part of her PhD.

Diva Amon originates from Trinidad and Tobago but decided to brave the cold and study for her undergraduate degree at NOC, University of Southampton.

Diva graduated in 2009 with a Master of Marine Biology. Following this, she returned to Trinidad to work for one year at the Institute of Marine Affairs and then decided to return to England in 2010 to pursue a PhD jointly between the NOC and the Natural History Museum, London.

Her PhD is investigating the ecology of organic falls in the deep sea around the world.

The next Marine Life Talk at the National Oceanography Centre: 1 November 2012

The National Oceanography Centre is reached via Dock Gate 4 (between Southampton's Town Quay and Ocean Village).