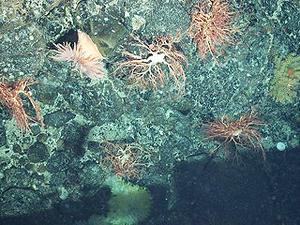 Deep-sea invertebrates on the Mid-Atlantic ocean mountain range - as part of the Census of Marine Life, Claudia is investigating benthic fauna of the Mid-Atlantic ridge within the vicinity of the Charlie-Gibbs Fracture Zone.

Following on from work undertaken during the past four years on three research cruises on board the RRS James Cook, she will be presenting early findings of her work along with video footage from the deep sea obtained using the remotely operated vehicle Isis.

Claudia Alt obtained a BSc in Zoology from the University of Aberdeen and then went on to work as a research assistant at the University’s Oceanlab facility, where she developed a passion for deep-sea biology. Following this she obtained a PhD position at NOCS where she is now in her third year of study.