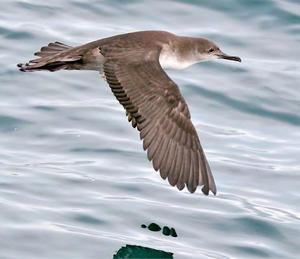 Why is marine wildlife monitoring important? by Alice Jones

The talk will cover the SeaWatch-SW marine wildlife survey and how the four years of effort-based observation data are being put to use in Alice's PhD. It will discuss the broad scope of the project in terms of the range of species that are monitored and the variety of different environmental data that are used; from underwater landscape maps, through plankton samples,to satellite imagery.

There will also be discussion of some of the other fieldwork involved in the wider research project, including a trip to tag Balearic Shearwaters at the colonies in Mallorca and future plans for further seabird tagging studies. Alice will be joined by Phil Collins, a current Masters student at NOCS, who will briefly discuss his final year project on gannet foraging behaviour.

Alice Jones is a third year PhD student studying marine ecology at the National Oceanography Centre in Southampton. Her research attempts to tease out the environmental controls on the distribution of large marine species around the coast of southwest UK. She has a BSc (Hons) in Zoology from the University of Manchester (2005) and an MSc in Aquatic Resource Management from Kings College London (2007).

Alice previously worked as a research assistant at both Kings College London and the Marine Ecology Research Centre in Kota Kinabalu, Borneo and has always been fascinated by the marine environment and passionate about its conservation.