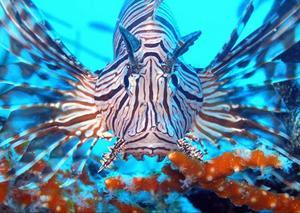 Lionfish research in Bonaire –  19.30pm at the National Oceanography Centre in Southampton –

The Indo-Pacific lionfish (Pterois volitans) is a venomous, voracious predator now established along the south east USA coast and throughout the Caribbean region. Since its introduction in 1992, the lionfish population has sky-rocketed throughout the Caribbean, making efforts to control increasingly difficult, and suggesting that the lionfish is one of the worst marine invasive species of all time. Its reproductive biology, thermal requirements and other life history characteristics foster its abundance in this region.

Lionfish are principally piscivorous, thereby affecting native reef community structures and commercial fish restocking attempts. Further effects include heightened stress on coral reef ecosystems, risks to human health and negative impacts on tourism, recreational and fishing industries. Many unsuccessful attempts with have been made to control the lionfish population; however scientists are still persistently searching for a solution to help save coral reef.

Fadilah Ali is a final year Masters of Environmental Science student at the University of Southampton where she has specialised in Biodiversity and Conservation.

Fadilah spent the summer 2010 period working as a Tropical Marine Ecology and Conservation Intern at the CIEE Research Station Bonaire in the Caribbean. Here, she led lionfish research activities while also collecting data for her dissertation.

Fadilah is using Bonaire as a case study by analysing the invasion and subsequent management of lionfish in Bonaire in order to suggest the best plan of action for her home country, Trinidad and Tobago; a Caribbean country yet to be invaded by lionfish.

The National Oceanography Centre is reached via Dock Gate 4 (between Southampton's Town Quay and Ocean Village).