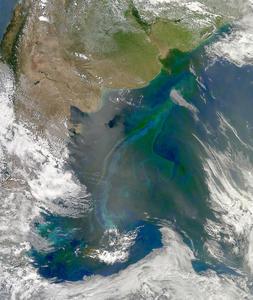 Phytoplankton and the global ocean – 2 June, 19.30pm at the National Oceanography Centre in Southampton –

Phytoplankton are small floating organisms of many different phyla which primarily inhabit the oceans and are subject to water movements. Derived from the greek words phyto (plant) and plankton (made to wander or drift), they are just like land plants, as they have chlorophyll which is used to capture sunlight and undergo photosynthesis.

The ability of phytoplankton to photosynthesize means they drawdown carbon dioxide from the atmosphere and produce oxygen. These organisms also form the base of most marine food webs. Indeed, the ancestors of the modern day phytoplankton are responsible for first evolving the ability to photosynthesise and produce oxygen, which changed our world forever.

The role of marine scientists is to understand how these plants have evolved in such a diverse array of species today. Scientists are also trying to understand the role these organisms play in mitigating climate change, particularly what controls the timing and effectiveness of large phytoplankton blooms. As just like land plants, they require a variety of different nutrients to grow, such as nitrate and iron, and these nutrients are not distributed evenly throughout the ocean.

Thomas Ryan-Keogh is a 2nd year PhD student at the University of Southampton’s School of Ocean and Earth Science based at the National Oceanography Centre.Thomas specializes in phytoplankton ecophysiology.

Thomas graduated from the University of Southampton in 2009 after obtaining a Masters of Marine Biology, before deciding to continue his academic career. As a part of his research, he has been on several cruises to the North Atlantic to study phytoplankton in their natural environment.