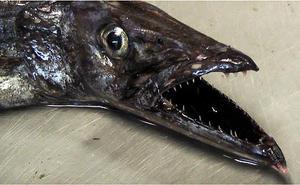 Fish from the continental slope west of the British Isles, 19.30pm at the National Oceanography Centre in Southampton –

The fish that live on the coastal and shelf seas of the British isles are relatively familiar from the fishmonger’s table and aquaria, and recent high profile campaigns have successfully raised awareness of the state of fish stocks in our shelf seas – but just a few hundred miles from our coastlines on the continental slope, we have a very rich and diverse fish community that is unfamiliar, seldom seen, poorly understood and unprotected.

The fish fauna on the continental slope between 500 and 2000m contains more than 200 species, ranging from familiar species like hake and monkfish to true deep water oddities. In collaboration with the Irish Marine Institute and Marine Scotland, we have been studying the composition; distribution, life styles and ecosystem structure in deep water fish. In this talk I will introduce some of the main characters, describe how these deep water ecosystems function, and consider briefly the effects of human exploitation of deepwater water habitats.

Clive Trueman’s research has been based on using the chemistry of animal tissues to reveal the diets of animals, either in the past or in difficult to observe settings.

Clive attained a degree in geology from Bristol University; he then studied dinosaurs for his PhD (also Bristol). Afterwards, he went to the Smithsonian in Washington to study early hominid sites in East Africa. From there he moved to the Weizmann Institute in Israel looking at biblical age archaeological sites. After that Clive moved to Portsmouth University to study modern fish, and from there to the University of Southampton.

Clive’s interests are still quite broad, but mostly lie in the general field of fish ecology. He has a particular interest in understanding life histories and behaviours in species threatened by fisheries expansion and environmental change.

The next Marine Life Talk at the National Oceanography Centre: 6 December 2012